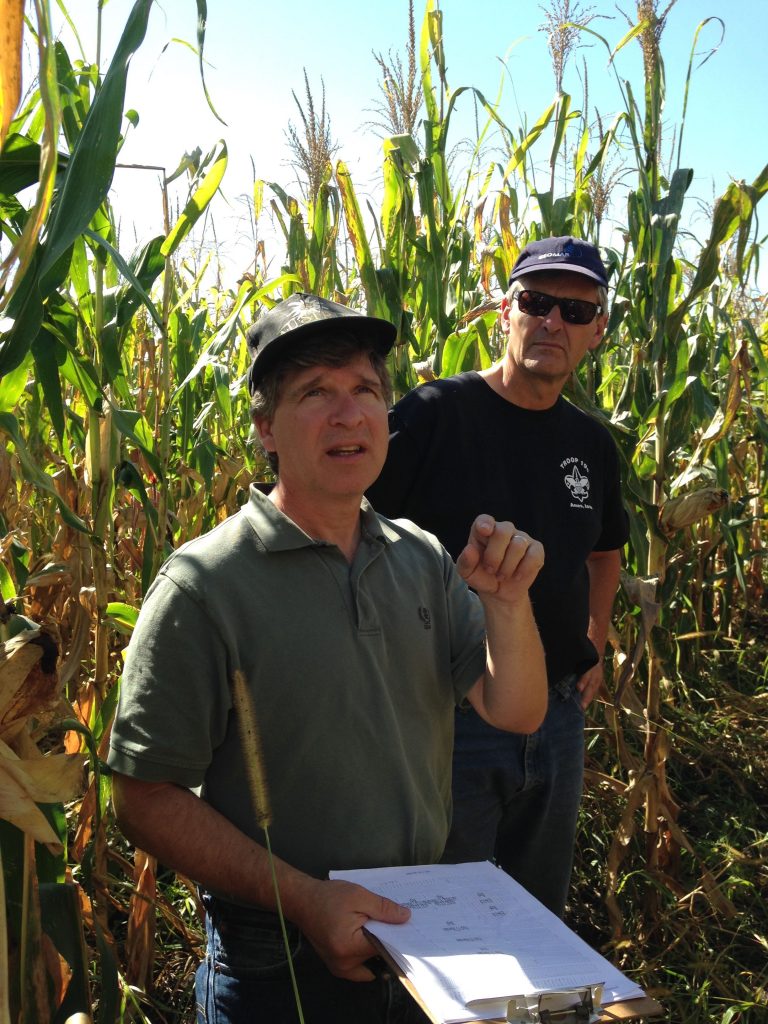 Paul Scott (left) and Thomas Lubberstedt (right) inspect a corn nursery near Ames during harvest. Lubberstedt and Scott are part of a research team working to improve the performance of field and sweet corn under organic growing practices. Kathleen Delate

Enter Thomas Lubbserstedt, a professor of agronomy at Iowa State University. Lubberstedt and a team of ISU researchers recently received a four-year, $1 million grant from the U.S. Department of Agriculture to advance organic corn varieties. By the end of the project, the team aims to have identified elite varieties that will improve the performance of corn under organic growing conditions.

“Our main goal is to figure out whether new genetic mechanisms can benefit organic field and sweet corn varieties,” Lubberstedt said. “We want to develop traits that can do well under organic conditions.”

Lubberstedt said the research could lead to organic corn with better resistance to disease, weeds pests and environmental stress.

Farmers who label their products as organic adhere to standards meant to restrict the use of synthetic inputs that include many fertilizers and pesticides in an effort to maintain environmental sustainability. Demand for organic products is growing as consumers become more concerned about how their food is produced and how it affects the environment, said Kathleen Delate, a professor of agronomy and member of the research team. Delate said the U.S. market for organic products reached $47 billion in 2016.

Researchers can use these haploids to create totally inbred genetic lines in two generations, whereas traditional plant breeding takes five or six generations to produce inbred lines, Lubberstedt said. These inbred lines are more reliable for evaluation in an experimental setting because they carry no genetic variation that could influence results. That makes it easier to identify lines with superior traits, he said.