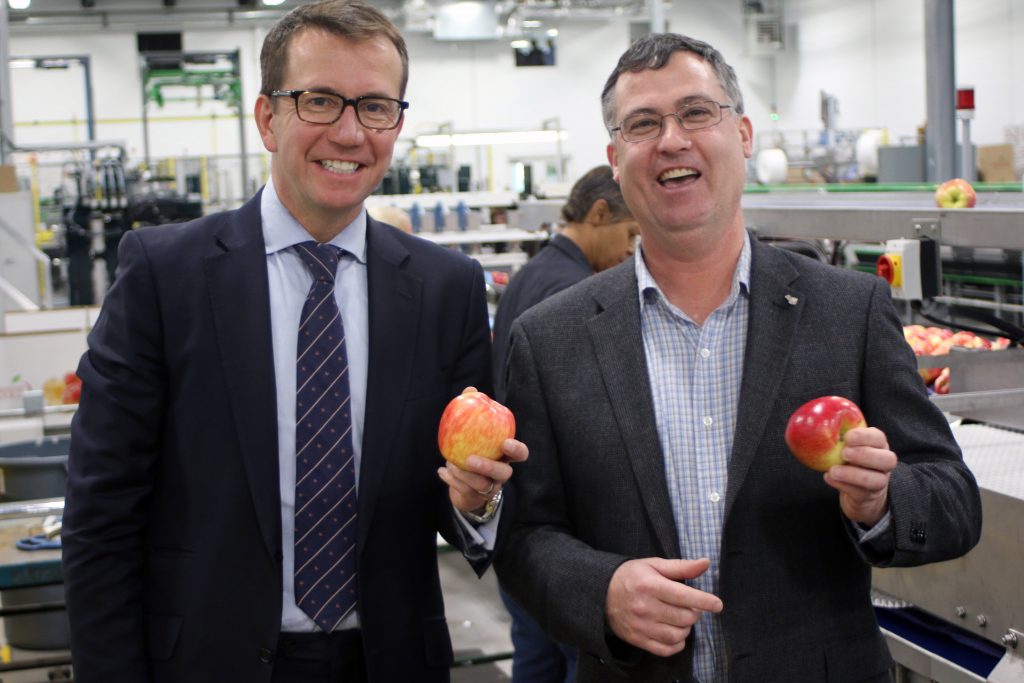 President of the Treasury Board and Member of Parliament for Kings-Hants Scott Brison with Scotian Gold Cooperative Ltd. President and CEO David Parrish in the cooperative’s new state-of-the-art apple packing plant in Coldbrook, Nova Scotia. Minister Brison was at the plant on Oct. 27 to announce $1.75 million for new technology that is helping the facility expand its production and apple exports. AAFC

October 27, 2017, Coldbrook, NS – Federal government representatives were at Scotian Gold’s Coldbrook facility recently to announce an investment of up to $1.75 million in support of the cooperative’s new state-of- the-art apple packing facility.

The investment enabled Scotian Gold to expand its facility and to purchase and install two new-to-Atlantic high efficiency production lines.

With the facility expansion and new technology, Scotian Gold expects to grow its sales and demand of premium, Nova Scotia-grown apples, both in Canada and in the Unites States.

“The new facility is an example of Scotian Gold’s willingness to invest in the future of our growers, our employees and the apple industry,” said David Parrish, president and CEO of Scotian Gold Cooperative Ltd. “Over the next number of years, the apple volume will increase for varieties such as Honeycrisp, Ambrosia and SweeTango. This facility will have the capability to supply Scotian Gold’s expanding markets in a timely and efficient manner.”