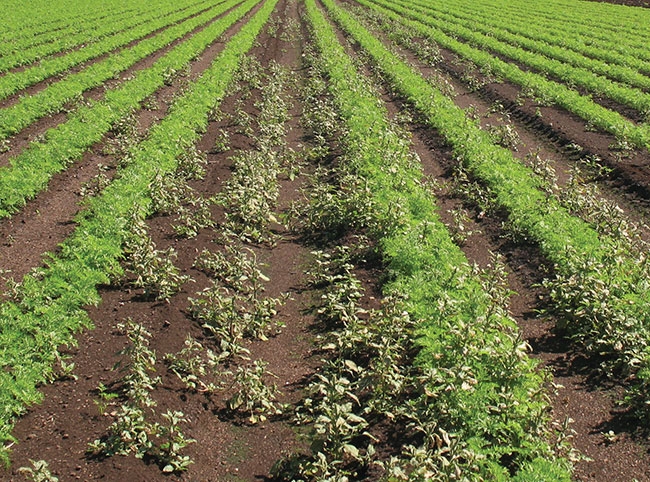 Canadian vegetable growers spend hundreds of thousands of dollars each year on herbicides that don’t kill the weeds they are targeting. Not only do these herbicide-resistant weeds cause farmers yield losses, but also the farmers often find themselves paying for multiple weed control strategies, including hiring workers to manually remove the weeds.

Herbicide-resistant weeds are a growing problem. In Ontario and Quebec vegetable growers have seen 19 cases of suspected herbicide resistance since 2016. Understanding the need for farmers to find out if they have resistant weeds, scientists at Agriculture and Agri-Food Canada (AAFC) began studying the problem.

Speeding up the process
One obstacle in determining if a plant is resistant to herbicides has been the length of time it takes to test the plant. Traditionally, the seeds of the weed in question are collected, grown into a mature plant and then the herbicide is applied to these plants. By the time the test is complete, six months or more has elapsed, long after the farmer has harvested that season’s crop and dealt with the issue.

That is why, in 2015, Martin Laforest, a molecular weed scientist at AAFC’s Saint-Jean-sur-Richelieu Research and Development Centre, teamed up with research scientist Robert Nurse and weed scientist and ecologist Marie-Josée Simard to develop a new test that can detect herbicide resistance in less than two weeks.

“As part of this project, Martin [Laforest] has been developing the genetic quick test, where we can look at mutations, over expression, or other factors to see if we can identify the resistance or type of resistance and verify it in a much shorter time, like weeks or days. Our goal is to consistently get back to the growers within the same field season and get them a recommendation that they can use,” Nurse says.

“The advantages are, if the grower knows that the plants are resistant in his field, he will not spray again with the same herbicide,” Laforest adds. “It will reduce his costs because the second spray will not be any more efficient than the first spray was. And it will reduce the amount of pesticides in the environment. This is a beneficial effect for the environment, but it also helps the producer and the people who eat the products.”

The test
For the grower, the test is quite simple. During the season, if the grower observes that a weed didn’t die after an herbicide application, and suspects that it is resistant, he or she can take a small piece of the leaf – the size of a quarter – put it in a paper envelope within a bag that the Research and Development Centre provides.

“The bag is filled with silica gel,” Laforest says. “The silica gel will dry the leaf sample as it is shipped to the lab where the genetic test is done. And once the sample reaches the lab, the material’s DNA is extracted and the genetic test is done. And depending on the species and on the herbicide used, we have identified a number of mutations that are causing resistance or mechanisms. The results are either positive or negative. Meaning, that we have seen the mutation or we have not seen the mutation.”

“If the test is positive and the weed is resistant, we would make recommendations for them to use another group of herbicides on those plants in the field,” Nurse says. “And then if there is no alternate herbicide available, we would recommend that they use some sort of cultural method, such as weeding, to get in there and prevent those plants in the field from producing seeds. Because if they allow them to produce seeds then that resistant seed gets into the soil and it can be persistent for many years and produce future populations.”

Nurse believes the big impact this will have on the industry is our being able to get the recommendation out in the same growing season instead of leaving it until the following season.

“Alternatively, if the test is negative, it may mean that the weed is susceptible to the herbicide,” says Laforest. “But it may also mean that it is another mutation, another mechanism is responsible for resistance. So, we take these samples and we perform the traditional or classical method for further analysis.”

Growing the program
For the past four years, most of the genetic testing has been done in Quebec, but Laforest says it was in development and the range of test was not as readily available as it is now.

This summer, the test became more wildly used when the team transferred the new technology to the detection service managed by the Quebec Department of Agriculture, Fisheries, and Food (MAPAQ). MAPAQ offered testing for both Ontario and Quebec. And in Laforest’s lab, scientists performed tests for common lamb’s quarters for New Brunswick and Prince Edward Island, and provided the results to another research detection service.

“In all, four provinces benefited from the service in the 2018 growing season,” Laforest says.

Many farmers quickly got the news they suspected. “Forty-two per cent of the populations tested positive for herbicide resistance using molecular markers,” Simard says. “So basically, we can have molecular quick tests that worked for basically almost half of the samples. We were impressed by these results.” Simard expects that percentage to continue to rise as the group adds more genetic markers to their database.

The team is currently working to make the technology even more effective and more widely available. New tests are being developed, because, Laforest says, “weeds are not the same in local crops or wide-acre crops.” But these tests have not yet been perfected. The team is also ready to transfer the technology and organizations are free to contact them to arrange access. The team has no intention of filing any patents on their process or trying to profit from the tests.

Testing evolution
Over time, testing will become more accurate as the team identifies more and more genetic markers. With the addition of three markers recently identified by Laforest, there are now a total of 15 markers that are species and herbicide specific.

New cases keep coming in and some of them are complex. The first 15 markers appear to be easier ones to spot. Others coming in are looking to be more complicated to tackle, but the team is looking forward to the challenge.

Simard recently learned that the team received funding for another year, which means they will be following up and continuing to develop these markers as samples are submitted.

“All of the markers that are already developed can be tested quite easily and for free via the MAPAQ,” Simard says. “And hopefully we will develop a few more this year.”

“It was a group effort,” Nurse says. “Kristen Obeid with the Ontario Ministry of Agriculture Food and Rural Affairs did a big job in promoting these markers and collecting samples in Ontario. She has done so much of the fieldwork. And Cezarina Kora with the Pest Management Centre has been really important in helping to provide funding. Because of her, we’re getting additional funding this year so we can continue building our molecular marker inventory.”

The future
The steps taken by these scientists will mean big results for Canadian vegetable growers. It is projected to save millions spent on herbicides each year, help growers become more productive, and keep tons of useless herbicides out of the environment.

“One of the big things that I am proud of is that we have done good science throughout the entire process, from collecting the samples, identifying mutations, confirming resistance, either with the genetic test or with the classical method. And then moving this technology back to the producers,” Laforest says. “I’m proud of this entire research approach and the results at the end.”