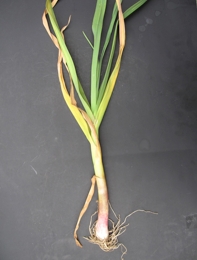 Garlic samples from two farms in two northern Ohio counties were recently received at Ohio State University’s Vegetable Pathology lab with symptoms that included long yellow stripes on the leaves and failure of the cloves to develop.

Lab tests indicate at least one virus, a Potyvirus called Leek yellow stripe virus (LYSV), to be the cause of the disease. This virus is transmitted through the cloves and by aphids.

Where this disease is present in a field, cloves should not be saved from any plant, even those without symptoms, for the next year’s crop. Plants may be infected but not yet showing symptoms. Virus-free garlic bulbs should be purchased from a reputable producer.