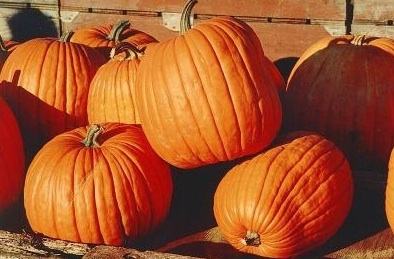 Downy Mildew – While downy mildew is a common occurrence in cucumbers, it is less so in pumpkins and squash. However, growing regions across eastern North American are experiencing unusually high pressure from downy mildew in all cucurbit crops this year. Symptoms and spores were recently identified in a pumpkin field in Norfolk county. While the disease is typically less aggressive in pumpkins and squash than it is in cucumbers, it is still a good idea to scout fields regularly for symptoms. If the scouting results show that the levels of disease are increasing, downy mildew targeted sprays may be warranted to keep later-maturing crops healthy. Keep in mind that fungicides commonly used for powdery mildew control will not control downy mildew.

Powdery Mildew – Powdery mildew is active in most pumpkin fields by now. Fungicides must be applied at the very early stages of this disease in order to be truly effective. Once symptoms are readily visible on the upper-leaf surface, it is usually too late to really benefit from control measures. When scouting, look for white, powdery spores on the lower surface of the leaf. There may be a corresponding light-green or yellow lesion on the top surface. Symptoms usually first appear on the mid-portion of the plant, or even the petioles.