December 5, 2008, London, Ont. –
‘Tis the season for cranberries. In Canada, commercial cranberry
operations are most common in the Maritimes, Ontario and British
Columbia, but they also grow other places.

December 5, 2008, London, Ont. – ‘Tis the season for cranberries. In Canada, commercial cranberry operations are most common in the Maritimes, Ontario and British Columbia, but they also grow other places. 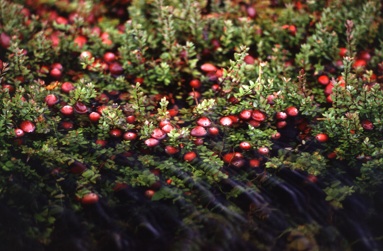 Murray Johnston and his wife, Wendy Hogarth, own one of only a handful of commercial cranberry farms in Ontario, just north of Bala in the Muskoka region. The farm was started in 1951 by Johnston’s late father. His brother is also a cranberry farmer in Aylesford, N.S. Johnston and Hogarth have 140 hectares in all, including almost 11 hectares in cranberries.

Johnston is the horticulturalist and Hogarth looks after the retail and agri-tourism part of Johnston's Cranberry Marsh, which includes a Cranberry Store, opened in the early 1980s, and Muskoka Lakes Winery, which they began in 2001. Their annual production of cranberries ranges from 136,000 to 182,000 kilograms. About one-third of their crop is sold to visitors and small wholesalers. Another third is used in winemaking and the rest goes to other commercial retailers or processors.

Because pictures often show what looks like ponds filled with floating cranberries, it is a common misconception that they grow in water. Actually, the fruit grows in bogs but on vines that are above the water table during growing season.

One way of harvesting the berries – which usually takes place from mid-September to the end of October but ran a little later this year – is called the “dry rake method” and doesn’t involve flooding the bogs. The most common method of picking is called “beating,” in which a machine with a water wheel and balloon tires is driven over the flooded beds and beats the berries off the vines. The berries float to the surface of the water and are gathered in with booms.

Johnston uses the “wet rake method,” in which the beds are flooded so the berry vines will float toward the surface. A mechanical picker then combs the berries off the vines and they are loaded into wooden bins or “boats.” Any attached greenery is removed in the packinghouse, where the berries are then graded and packaged.

The bogs are also flooded two other times during the year in the first cold days of winter to form a layer of ice over the vines to prevent winter-kill and in the early days of spring to prevent frost damage.

Hogarth manages an extensive website that includes some of her favourite cranberry recipes at www.cranberry.ca.