September 10, 2019  By The University of California - Agriculture and Natural Resources 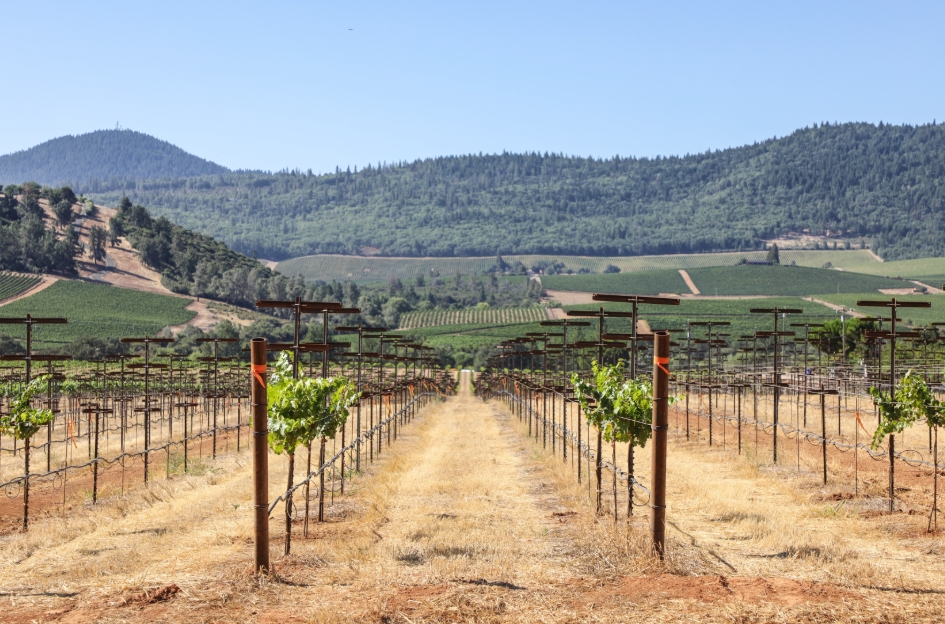 Researchers will study 10 rootstock and 10 cabernet sauvignon clone combinations to identify which will grow best in changing climate conditions and produce acceptable yield and grape quality for wine. UC

UC Cooperative Extension, Beckstoffer Vineyards and Duarte Nursery are launching the wine industry’s most ambitious cabernet sauvignon rootstock and clone trial in the Red Hills of Lake County to give the varietal greater resilience to climate change.

“This trial will give us data that will help inform and improve growing practices for cabernet sauvignon across the state for the next two decades,” said the trial’s lead researcher, S. Kaan Kurtural, UC Cooperative Extension viticulture specialist at UC Davis Department of Viticulture and Enology and Oakville Experiment Station.

While the experimental vineyard is in Lake County at a property known as Amber Knolls, the data will be analyzed in Oakville.

The trial officially launched Aug. 15 in Kelseyville with a celebratory vine planting as Andy Beckstoffer and son David Beckstoffer planted the vine that also marked a milestone – the 1.5 millionth vine for Beckstoffer Vineyards Red Hills. Researchers, industry representatives and journalists gathered to celebrate what is affectionately known as “the mother of all cabernet trials.”

“Everything is wonderful in Lake County – for growing cabernet sauvignon and for doing research,” Andy Beckstoffer said, noting the Lake County region’s ongoing support for farming.

Pedro Rubio, Beckstoffer Vineyards Red Hills general manager, said, “Lake County will definitely benefit, but the results from this trial will be very helpful for the whole industry.”

Designed to address resiliency in a changing climate, the trial will examine which combinations give the best results with a focus on drought tolerance and water-use efficiency as well as crop yield and grape quality.

“The idea behind the trial is to gain further insights into the interactive effects of rootstock selections crossed with cabernet clones and the impact of that on water relations and overall sustainability,” said Clint Nelson, ranch manager for Beckstoffer Vineyards Red Hills.

“The trial will give us an understanding of the synergistic relationship of clone and rootstock and what combination drives the best quality and production,” he said.

According to Nelson, the trial will look at canopy architecture, yield components, water relations, traditional fruit chemistries, secondary metabolites such as aroma, mouthfeel and color, as well as overall vine performance.

Duarte Nursery is providing all of the planting material for the trial.

“The diversity of rootstocks and clones chosen for this project includes some of the most modern cabernet sauvignon clones designed for high quality and for production,” said John Duarte, nursery president.

Duarte said the trial is employing a lot of cutting-edge technology and using some of the cleanest plant materials available to prevent grapevine viruses.

Viticulture has become more data-driven, and this trial will measure a staggering amount of data generated by the 100 or so rootstock-clone combinations over the approximately eight to 10 years of the trial’s duration.

“Nothing of this scope has been attempted,” said UC Cooperative Extension specialist Kurtural, who acknowledged logistics as the biggest challenge with planning, data collection and timely analysis being at the forefront of his mind. “It keeps me up at night.”

Planning for the length of the project also is a concern. The vineyard will be planted this year and the first crop will be harvested in 2021. It will take at least six years to begin to see consistent results.

Kurtural said the project will provide research opportunities in academic and applied science for at least two students to complete work toward a doctoral degree in horticulture and agronomy.

Glenn McGourty, UC Cooperative Extension viticulture advisor for Lake and Mendocino counties, is a research collaborator on the project.

“Lake County obviously has an important role to play in fine wine in the North Coast, particularly for cabernet sauvignon,” McGourty said. “And this trial really marks the importance of this location in terms of the commitment and the collaboration that we see here among both public and private sectors.”

Related
Oaks in vineyards a ‘win-win’ for bats and growers
Wood mulch can help in climate change fight
Government of Canada fighting climate change with price on pollution
Webinar: The impact of climate change on fruit and vegetable crops – Watch now!
Tags