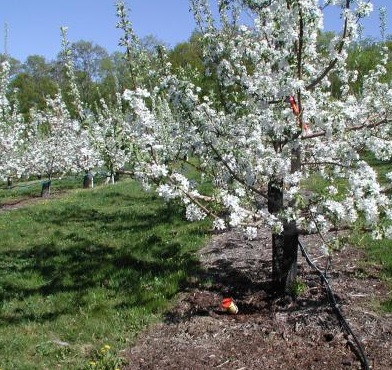 But, when done properly, the results can be rewarding.

“Whether the price premium actually results in greater profitability, however, depends on yields, fruit size and quality,” Ingels said in a recent newsletter to Sacramento County growers. “Surveys have shown that the top three production issues in organic tree fruit production are crop load management, weed control and soil fertility.”

“In most years, however, growers find that in-row weed control and providing sufficient nitrogen are the greatest challenges,” he stressed. “The two are linked.”

It averages about three per cent nitrogen, and also has phosphorus, potassium, calcium and magnesium. Feather meal is sometimes used in Pacific Northwest orchards. It has up to 13 per cent nitrogen but is still much more expensive than poultry manure and it has no other nutrients.

Compost is an excellent soil amendment, but the nitrogen in it is largely unavailable during the first year. To maintain organic certification, uncomposted manures may not be applied within 90 days of harvest.

A portion of the nitrogen contained in manure and compost will volatilize into the atmosphere, as much as 30 per cent by some estimates, if not disked into the soil.

“With most orchards … being no-till, applied manure will lose nitrogen to the air, although less is lost if it’s irrigated fairly quickly,” Ingels said. “Manure and compost also release plant-available N at different rates — the lower the ratio, the faster the release.”

With poultry manure, the majority of the nitrogen will be available to plants in the first year. Poultry also has the highest volatilization potential. The “decay series” of manures was studied by UC researchers in the 1970s, he said, and the proportion of nitrogen availability during a three-year period was shown by year to be: chicken, .90, .10 and .05; dairy, .75, .15 and .10; and feedlot, .35, .15 and .10.

“These values may vary widely for any given manure based on many factors,” Ingels said. “Composts generally fall well below feedlot, manure in N availability in the first year.”

Cover crops often provide the most cost-effective way to add nitrogen. A vetch cover crop, often used with peas and/or bell beans, can supply up to 150 pounds of nitrogrn per planted acre. But, this mix usually is used in disked orchards, he said.

Reseeding annual subterranean clover, with or without other annual clovers or medics, can provide similar amounts of nitrogen, but nitrogen loss through volatilization can result from leaving the clippings on the soil surface. Perennial clovers also have been shown to add large amounts of nitrogen, but they are invasive and compete with trees for water. And, all clovers attract gophers.

The greatest concentration of tree roots is under the canopy in the tree row, Ingels said. Weeds in the tree row compete with trees for nutrients and water. This competition is especially problematic for young trees but even the yields and fruit size of mature trees can be reduced by in-row weeds.

Organic weed management practices include mowers and cultivators that move around trunks and sprinklers, organic herbicides, flame or steam weeders, geese or sheep, and organic and synthetic mulches.

In-row cultivation can effectively control weeds, although tree roots near the surface can be damaged. Some implements are hydraulically driven with a vertical axis cultivating head, whereas others are ground-driven, rolling cultivators that can be used at speeds up to eight miles per hour.

“Growers have found that some implements tend to break down fairly frequently,” Ingels said. “In 2002, a Yakima Valley orchard study showed cultivation-based weed control was more than four times the cost of a typical herbicide program of two applications per season.”

Available organic herbicides, mostly based on clove or cinnamon oil, or acetic and citric acids, are effective mainly on very young weeds so they must be applied often, and they have limited efficacy on perennial weeds, he said.

Flame weeders are fairly effective on young weeds, but they often require multiple passes for some species, and they use substantial amounts of fuel, Ingels noted.

“Sheep or geese can be very effective, too,” he said. “They can require fencing and they must be removed 90 days before fruit harvest.”

Mulches, either organic or landscape fabric, provide a practical – but expensive – method of preventing or greatly reducing weed growth in tree rows, while improving the nutrient and moisture status of trees. Wood chips add organic matter and nutrients, but they are less effective against perennial weeds.

“In this study, wood chip mulch provided the best weed control in all three years, although it needed reapplication in year three,” Ingels said. “This treatment also produced the greatest tree growth and fruit size.”

Synthetic fabric allows water penetration but it excludes light to act as an effective barrier to weed growth. A three- to four-foot width of fabric is placed on either side of the row and they overlap and are pinned where they join, although weeds sometimes grow between the overlapped fabric.

The outside edges are buried or pinned. Weed seeds may germinate on top of woven fabric and roots may grow through and establish in the soil, so some growers pull back the fabric each year and apply fertilizer or compost before repinning the fabric. Mulches, especially fabric, can also lead to the buildup of voles or meadow mice.

Cumulative cash costs for the first four years before fruit production were $2,123 (US) per acre higher with ground cover relative to no cover. These costs, however, were offset quickly by the increased returns from enhanced fruit yield and size.