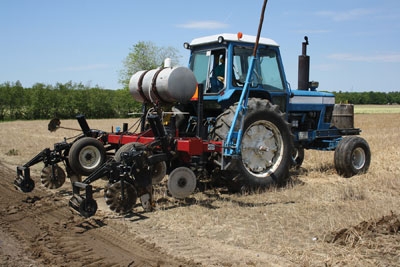 Cover crops grown in conjunction with deep zone tillage must be completely dead before the deep tillage can be performed in the spring. Photos courtesy of Agra Point

Deep zone tillage (DZT) may not be for everyone, according to Dr. Viliam Zavalo. But the Agra Point horticulturalist feels DZT – combining reduced tillage and sub-soiling – could have application for some horticultural crops.

In Nova Scotia, Dr. Zavalo observed vine crops, pumpkins, squash and spinach could benefit from DZT, and he is also examining cole crops and sweet corn. DZT might also work well in fruiting crops, like peppers and tomatoes, he added.

Dr. Zavalo recently reported on a 2010 inspection tour of New England examining DZT in operation. He noted that a lot of the New England growers he visited custom build the DZT implements they use. He also observed the cover crops grown in conjunction with DZT must be completely dead before the deep tillage can be performed in the spring.

In New England, sweet corn is a dominant crop that is able to get by with DZT without using irrigation, Dr. Zavalo said.

“We visited nine farms from 100 to 2,000 acres. The growers said they would never go back to conventional tillage.”

DZT’s advantages include increased organic matter in the soil, improved soil water and nutrient holding capacity, reduced compaction, breakup of plough pan, improved drainage and better soil quality, Dr. Zavalo said. In five to 10 years of use, the tilling practice can significantly change a field’s condition, cut labour by 25 to 70 per cent and lower fuel costs by 25 to 70 per cent compared to mouldboard ploughing.

Cornell University’s Extension service has encouraged movement to DZT throughout New England. Dr. Zavalo reported a lot of cropland around New England cities has been placed in land trusts, which do not advocate conventional plowing. This has also driven adoption of DZT.

According to reports out of New England, after 10 years of DZT, plough pans have been eliminated and ability to move to strip tillage or no-till has been enhanced, said Dr. Zavalo.

Among the tilling method’s key downfalls is the fact that weed control typically shifts from controlling annual weeds to managing perennial ones with more applications of Round Up required in the first year, he said.

Dr. Zavalo says growers shifting to DZT need to adapt to a different cropping system. DZT cover crops include rye, oats, barley, field peas vetch, buckwheat and red radish. One Massachusetts grower extended the storage season of his squash by two months with DZT and its associated cover crop, he said, adding that some New England growers claim they can eliminate phytopthera by using DZT.

The concept of DZT was first introduced to Nova Scotia growers during the 2010 Scotia Horticultural Congress.

Agra Point started DZT trials in 2010 on cauliflower and is now considering another DZT trial on cucurbits (pumpkin and squash).