A new processing plant in Guelph will provide benefits for sweet corn growers as a global market is developed for PhytoSpherix. 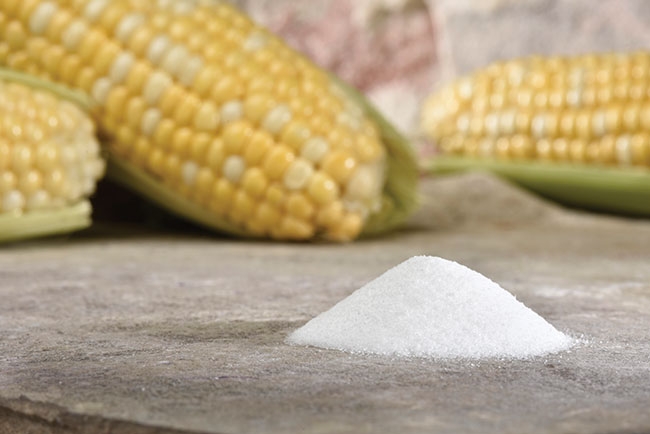 A new processing plant in Guelph, Ont., plans to transmute sweet corn into a highly innovative product that can be used in a myriad of cutting-edge applications.

Dr. John Dutcher, with the help of three other scientists at the University of Guelph, discovered and isolated nanoparticles in sweet corn called glycogen, a biodegradable material found in plants. These nanoparticles are being marketed as PhytoSpherix by the company founded by the scientists, Guelph-based Mirexus.

The firm asserts that a small amount of PhytoSpherix can be used in a wide variety of ways in cosmetics, pharmaceuticals, medical treatments and nutrition, from providing moisturization and stability to products to being used to form a film or encapsulate other substances.

According to Mirexus president and CEO Phil Whiting, glycogen use has been limited and its existing market is very small because, currently, almost all glycogen is made from oysters.

“This [form of] glycogen is too expensive and too difficult to produce, and in addition, shellfish allergies create problems,” Whiting explains. “Sweet corn glycogen solves these problems. It’s lower cost, no allergies, plant-based and scalable to large quantities. We expect to create a global market.”

Indeed, over the next 15 years, the global market for bioproducts is projected to reach $200 billion dollars. Whiting thinks that predicted growth is due to several factors, such as an increasing demand for natural and sustainable products and a desire for plant-based rather than animal-based goods. There is also the fact, he adds, “that bioproducts are becoming as good or better than their synthetic oil-based rivals.”

The Mirexus plant in Guelph is being built through $1 million in support from Agriculture and Agri-Food Canada. That funding is also being used to commercialize the company’s patented micro-filtration process. Plant construction and company operation over the next few years is also being supported through private investment. The plant is expected to lead to 70 new jobs over the next five years.

Process basics
While the exact details of manufacture are confidential, Whiting can share some basics. The process begins with purchased frozen sweet corn kernels, which are gently ground and soaked.

“The glycogen is water soluble, so we then separate it from the fibre, oils and proteins by centrifugation and filtration,” he explains. “The final step before drying is ultra-filtration, using pressure to force the water through a very tight filter, leaving behind a concentrated glycogen solution. We then spray-dry to produce a powdered product.”

Key scientific instruments used in the process include one that performs dynamic light scattering (to measure glycogen particle size), a nitrogen analyzer (to measure protein content) and a lipid analyzer (fat content).

About 16 tonnes of PhytoSpherix will be produced every year, and this will require the purchase of about 450 tonnes of sweet corn a year from Ontario growers.

“During start-up, we will buy frozen sweet corn kernels from the Bonduelle Group,” Whiting says. Bonduelle is a global giant in frozen and canned vegetable processing, with several facilities in Canada. “As the business scales beyond the first factory, we will explore direct-to-farm relationships. Today, we have enough to handle getting the factory itself going.”

Mirexus is targeting three main markets for product export: Personal care/cosmetics; nutraceuticals and pharmaceuticals. Whiting adds that phytoglycogen from corn can be a platform for new antibiotics, enhanced vaccines and new therapies relating to the health of humans and animals.

With yet another market for Ontario corn, the future of the crop looks bright.

“We think all businesses are healthier when they can serve multiple markets,” Whiting says, “especially new markets that offer better value and are not so dependent on commodity variability.”