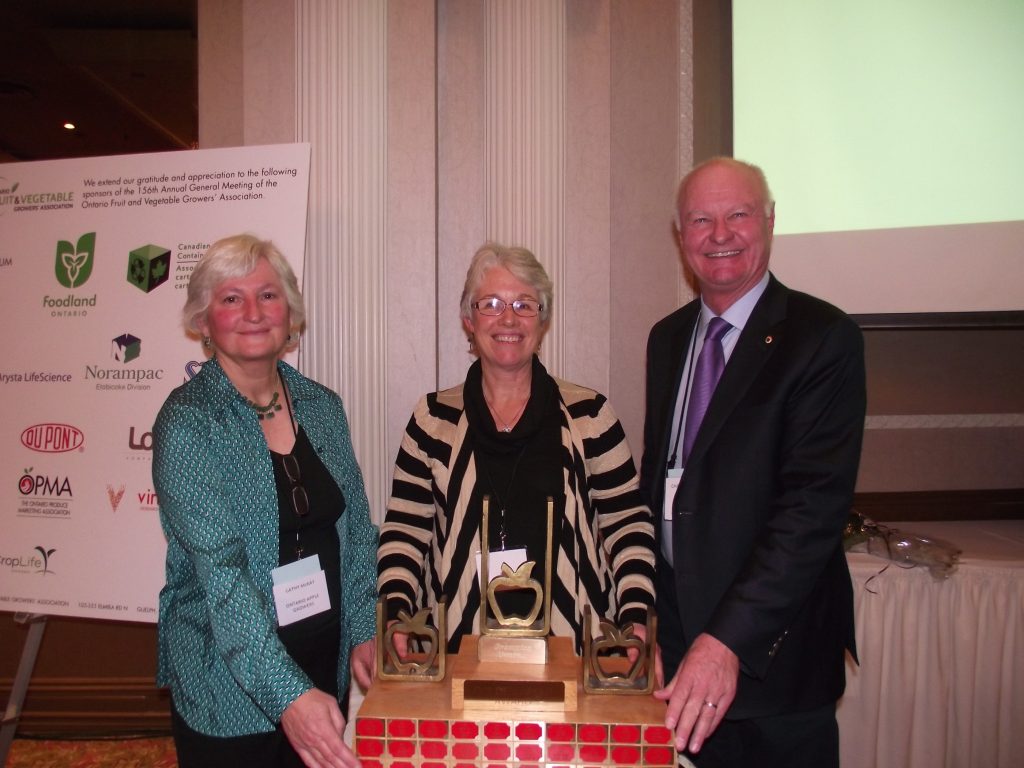 Huffman is the apple specialist with the Ontario Ministry of Agriculture, Food and Rural Affairs (OMAFRA). The award was presented at the annual banquet of the Ontario Fruit and Vegetable Growers Association held recently in Niagara Falls.

“Throughout her career, Leslie has shown extraordinary commitment and dedication to the advancement of Ontario’s apple industry and to supporting growers whenever they have needed her,” said Charles Stevens, chair of the Ontario Apple Growers (OAG). “She’s involved in many different facets of our industry and has played a key role in many education and research initiatives.”

Huffman grew up on a mixed farm near Harrow, Ontario and graduated from the University of Guelph with a degree in Horticultural Science. She joined OMAFRA in 1981 as a fruit and vegetable extension horticulturalist for Kent and Essex counties, and became the province’s weed management specialist for horticultural crops in 1996, where she helped oversee the registration of approximately 60 herbicides for fruit crops. She’s been the provincial apple specialist since 2008.

Huffman is co-editor of Hort Matters, editor of the Ontario Orchard Network Newsletter, and is active on many industry committees, including the International Fruit Tree Association (IFTA) research committee and working closely with counterparts and experts in Michigan and New York State. She has helped co-ordinate and co-chair the apple program at the Ontario Fruit and Vegetable Convention for many years, and has been instrumental in establishing and running the annual sweet and craft cider competitions at the convention.

“Leslie has worked very closely with staff and board of the Ontario Apple Growers over the years, including helping to plan and lead our annual summer orchard tours and working on various research initiatives as part of the OAG research committee,” added Stevens. “She’s also active with grower groups in her area and in the local community.”

Leslie and her husband, Doug, Balsillie operate a fruit farm near Harrow with their four daughters.

The Chemtura Golden Apple Award is presented annually to a recipient who has made outstanding contributions to the Ontario apple industry.