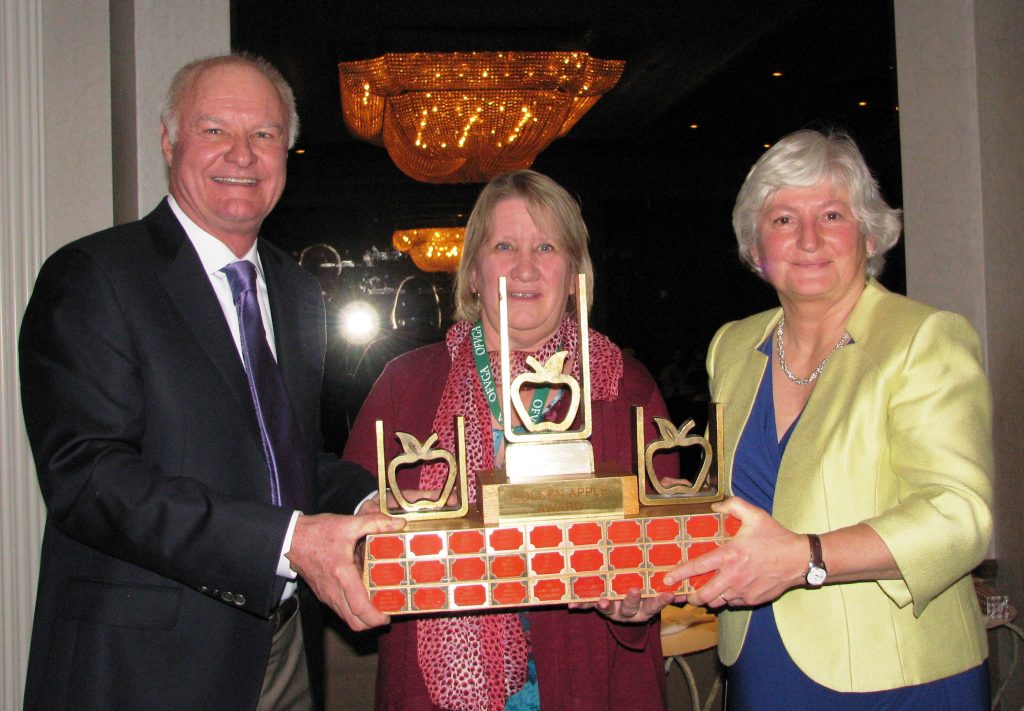 Appleby is an Integrated Pest Management (IPM) Systems Specialist with the Ontario Ministry of Agriculture and Food and Ministry of Rural Affairs (OMAF/MRA). The award was presented at the annual general meeting of the Ontario Fruit and Vegetable Growers Association in Niagara Falls.

“Throughout her years working with the ministry, Margaret has shown her dedication to the apple industry and has always gone above the call of duty and made herself available to the growers whenever they have needed her,” says Charles Stevens, chair of the Ontario Apple Growers (OAG). “She is involved in initiating and implementing research projects that support the apple industry and has been an invaluable asset to our industry by sharing her knowledge and expertise.”

Appleby graduated from the University of Guelph in 1976 with a degree in Environmental Biology and was an apple grower for approximately 10 years before joining Agriculture and Agri-Food Canada at Smithfield where she worked in their nursery and in IPM. She was a regional IPM specialist for Quinte until 2000, when she joined OMAF/MRA as an IPM Systems Specialist.

Appleby was one of the first individuals in Ontario to scout out the popular Ambrosia apple variety in British Columbia and was very involved with cultivar trials when they were first established in Ontario in 1999. She was also responsible for organizing the international IPM conference in 2002, which brought many international experts to Ontario.

Annually, Appleby works with the Northumberland and Durham apple IPM group to hire crop scouts and run an IPM program. She has also been the lead in many in-field apple research projects, including finding a solution for managing oblique-banded leafroller (OBLR), developing scab management programs, and tracking the migration of European Apple Sawfly and looking for solutions for this pest.

“Margaret organizes grower meetings and conferences and has been instrumental in the success of the Durham apple study group, which regularly attracts 20 or more growers and industry representatives to meetings during the growing season,” adds Stevens.

The Chemtura Golden Apple Award is presented annually to a recipient who has made outstanding contributions to the Ontario apple industry.