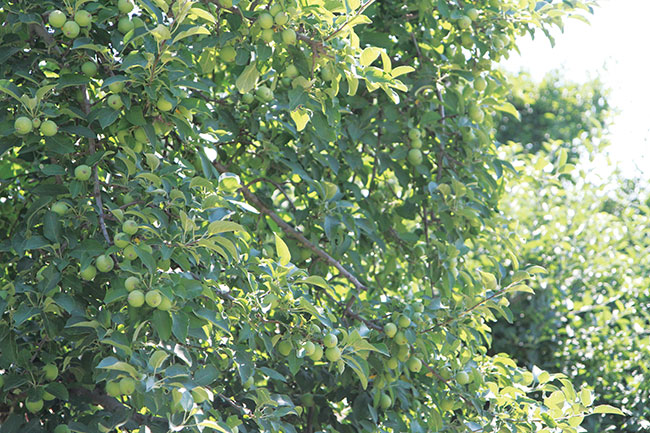 An apple orchard on the outskirts of Simcoe, Ont. Photo by Alex Barnard.

Apples are the most widely cultivated fruit crop in the world and second-most in Canada. However, recently, there has been an emerging issue of young apple trees suddenly dying. The first case was reported in 2013 in Pennsylvania, where growers noted the sudden, unexpected death of apparently healthy young dwarf apple trees. This phenomenon is called “rapid tree decline” (RTD) or “sudden tree decline” (STD). More recently, RTD in apple and pear trees has also been reported in Ontario, British Columbia, and Prince Edward Island. One grower in P.E.I. had been seeing sudden deaths in his young Asian pear trees for the past several years, but the loss was especially severe in 2018.

The sudden death phenomenon seems to be exclusively targeting younger trees, about two to eight years old, and mostly those with dwarf rootstock. While abiotic stresses, such as winter, drought, and herbicide injuries, could be playing a role, they are not the main cause of Sudden Tree Death. One preliminary study found that fungal pathogens, such as Phomopsis spp., Fusarium spp. and Botryospharia dothidea, and Ambrosia beetles could be associated with RTD. Other scientists suspect that luteovirus 1 could be involved in RTD after isolating this virus from RTD plants.

In the spring of 2018, Agriculture and Agri-Food Canada (AAFC) scientists at Kentville Research and Development Centre received rootstocks from growers in Nova Scotia. Visually, these rootstocks had necrotic and canker symptoms in the middle part of the stems, but both the roots and tops were alive and healthy. Several apple rootstocks – such as EMLA 9, Supporter 4, M9-T337, and Pajam 2 – from four different nurseries were affected. Initially, it was suspected that these lesions may have been caused by mechanical injury from pulling up the rootstocks from the ground. The AAFC team wanted to know if pathogens were responsible for this condition.

They were able to isolate fungal pathogens from eight infected plants of the four different types of rootstocks showing visible necrotic lesions. More than 90 per cent of the isolated fungi looked similar to one another. Based on the colony morphology and spore type, Diaporthe was identified as a major pathogen. By analyzing and comparing DNA sequences of multiple genes from the fungal isolates, researchers were able to confirm the identity of the pathogen as Diaporthe eres. Diaporthe is a genus of endophyte filamentous fungi and opportunistic plant pathogens. Greenhouse studies where young, one-year old apple trees were artificially inoculated with the isolated pathogen confirmed that Diaporthe eres is the causal agent. The young, one-year-old infected apple trees had the same necrotic and canker symptoms as those observed in the rootstocks received from growers. Symptoms were observed three days after inoculation and spread in both directions from the inoculation point and led to the sudden death of the young plants after four weeks. Based on these findings, scientists at AAFC believe that Diaporthe eres causing lesions and death of young apple trees is one of the major causes of RTD in apple and pear trees in Atlantic Canada.

Although the AAFC team has identified one potential pathogen and there are emerging reports of sudden apple tree deaths, it is still early to conclude if RTD or STD are the results of an outbreak. Each reported incident will need to be investigated, as the causes for RTD and/or STD may be different in each case or by geographic location.