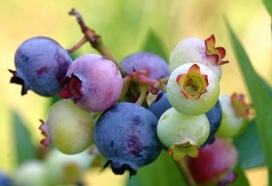 August 1, 2012, Sheffield Mills, NS – Growers are saying it’s one of the best years on record for the high-bush blueberry crop in Nova Scotia’s Annapolis Valley.

While farmers are struggling with hot, dry weather, many blueberry farms operate with irrigation systems spraying the bush rows.

Kidston says a mild winter combined with good pollination has resulted in a bumper crop.

The grower says the biggest issue is getting enough pickers to harvest the extensive crop.

The harvest is about two weeks earlier than usual, and many workers are still in the fields picking beans and other vegetables.

Kidston said he expects his crop to top 590,000 kilograms this year, up at least 20 per cent from previous years.