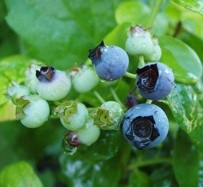 May 8, 2012, Vancouver, BC – The British Columbia Blueberry Council is reporting that this year’s blueberry crop is looking good after a relatively mild winter, and little weather damage.

While it is too early to estimate the size of the harvest, signs point to picking starting in the middle of July.

“Our blueberry plants are beginning to bloom and bees should be heading out into the fields soon,” said Debbie Etsell, executive director of the B.C. Blueberry Council. “Weather has been about 1 degree Celsius cooler than normal which has put us slightly behind, but we shouldn’t be as late as last year.”

The British Columbia Blueberry Council represents more than 800 blueberry growers with plantings of high bush blueberries around 8,100 hectares that produce around 40 million kilograms of blueberries annually.