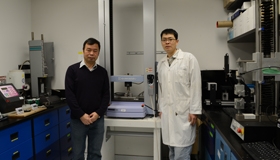 The bioplastic is made from the by-products created by industrial processing of certain plants. Not only will this bioplastic protect perishable food better than regular plastic packaging, it is also more environmentally-friendly and sustainable.

Dr. Liu has been working to advance the science around bioplastics for over 15 years. He is a “green” chemist – someone who specializing in making plastics and other goods from agricultural plants.

“I, along with industry, saw great opportunity to create something useful out of the leftover by-product from industrial canola oil processing, which is why this project was funded under the Growing Forward 2 Canola Cluster. We can extract all sorts of things like starches, proteins, and oils from plant materials to make plastics, but I am particularly interested in proteins from canola meal in this research project,” says Dr. Liu.

Plant protein-based bioplastic has been shown to have similar attributes to other plant-based bio-products; it can stretch, it doesn’t deform in certain temperatures, and in some cases, it biodegrades. That being said, building the polymers (long chains of repeating molecules) that are the basis of biofilms and plastics can be tricky and finding just the right technique and formula is challenging.

One challenge with some protein polymers is that they are can be sensitive to a lot of moisture – not a good trait if you want to use them to protect food with a natural moisture content. Dr. Liu and his team recently discovered a formula and technique to make soy and canola protein polymers water-resistant by “wrapping” them in another polymer.

The team was also able to add an anti-microbial compound to the mix, which not only made the resulting bioplastic able to prevent nasty bacteria like E. coli from growing – but, depending on how much was added, also could change the porosity of the film.

The porosity of bioplastic (essentially how many holes are in it) is very important in food packaging since different foods need different amounts of moisture to stay fresh. Having a way to adjust porosity (either having more or less small holes in it) is a great feature in a potential plastic because it can either let more or less water go into or out of the area where the food is.

Even though it is in the early stages of development, Dr. Liu believes there is great future for bringing this technology into the marketplace.

“The use of plant-based plastics as a renewable resource for packaging and consumer goods is becoming increasingly attractive due to environmental concerns and the availability of raw materials. My hope is that someday this research will lead to all plastics being made from renewable sources. It would be a win for the agriculture sector to have another source of income from waste and a win for our environment,” explains Dr. Liu.

Should this potential biofilm prove viable, it would be a win for the agriculture sector and the environment, as it would provide added revenue by creating a renewable plastic alternative.