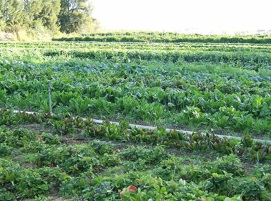 The farming population fell to a historic low in 2006, according to the study.

One in 46 Canadians lived on a farm in 2006 compared to one in three in 1931. At the same time, the animal population has exploded – the number of cattle and chickens has doubled while the number of pigs tripled.

“We’ve seen such a change in the course of a lifetime,” said Steven Danford, senior analyst at Statistics Canada.

Farmers have moved from growing food for themselves and local markets to producing food for cities and for export, the study found.

Not only are there more animals on Canadian farms, but the volume of crops has grown as well.

As well, there were just over 728,000 farms across Canada 75 years ago with an average size of 90 hectares.

“Farms have been getting bigger and more efficient over time,” Danford said. “The Canadian population as a whole has become more urban. You need fewer people on the farm.”

The farming population is also getting older. Analysts found more than 11 per cent of people living on Canadian farms in 2006 were over 65 compared to six per cent in 1971.

“We’re seeing the cohorts of the baby boom moving through the farm population just as they are in the general population,” Danford said. “Those older people are leaving farming, but certainly there are younger people coming in to take over.”

Unlike the past, when the nation’s farmland was settled by immigrants, today’s new Canadians are settling in cities. While the number of newcomers in Canada is rising, their numbers are falling on the farm, Danford said.

Immigrants made up seven per cent of Canada’s farm population in 2006 – down from almost nine per cent in 1971, when the majority of immigrant farmers come to Canada from Europe.

In 2006, the proportion of immigrants born in Asia and the Middle East surpassed those born in Europe for the first time. And immigrants now tend to settle in the most populated areas.

“The vast majority of Canadians live in urban areas,” Danford said. “The fact remains that the farm population as a whole is not a very big proportion of the Canadian population.”