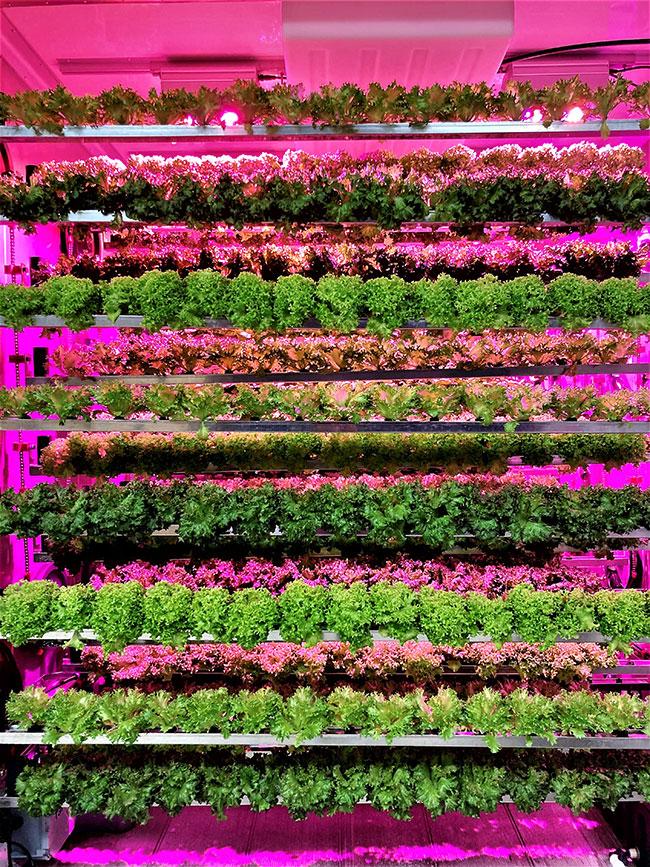 A variety of configurations allow the CubicFarm growing chambers to be customized to crop, such as these spring greens. Photo courtesy of CubicFarm Systems Corp.

Many vegetable growers have mitigated weather-related risks using greenhouses and high tunnels. But sophisticated new contained growing systems are putting production into the hands of non-traditional growers, helping to shorten supply chains across the country as the buy-local movement intensifies. Suppliers are even stepping up, with Sakata Seed Corp. establishing a division last year dedicated to supplying the emerging sector.

A variety of intensive micro-farming systems are now on offer. Grocers such as Sobeys Inc., owned by Empire Co. Ltd. of Stellarton, N.S., have rolled out in-store farms at locations in seven cities through a partnership with InFarm of Germany. The installations resemble a beverage cooler, standing 10 feet high and six feet wide, but contain four shelves of plugs bathed in LED light. The systems use 95 per cent less water and require 90 per cent less transportation and 75 per cent less fertilizer than conventional soil-based farming systems to produce a variety of herbs and leafy greens.

“This innovative urban farming solution was a great way to provide our customers with the freshest possible local produce, as it is grown right in the store they are buying it from,” says Niluka Kottegoda, vice-president, customer experience with Sobeys. “We have been very excited by how our customers are responding to this. Not only do they appreciate the sustainable nature of the farms, but they certainly love having access to the freshest possible leafy greens, lettuce and herbs all year long.”

The enclosed systems maintain a controlled climate, with variables such as temperature, humidity and lighting tailored to each crop. A central farming platform constantly gathers information about plant health (up to 50,000 data points per lifetime) from across all Infarm installations that allows machine learning to steadily adjust and improve growing conditions at individual locations.

“From there we can monitor the growing environment for all of the farms in real-time and make adjustments as needed,” Kottegoda says.

The systems are effectively a turn-key production system for retailers. All store staff need to do is harvest and package the plants for purchase. Herbs and microgreens can be sold as plugs for replanting at home or harvested and packaged for immediate consumption.

Sobeys isn’t the first grocer in the world to embrace the system. InFarm has more than 1,200 locations in 10 countries, double the number a year ago. It recently partnered with Amazon-owned Whole Foods to roll out the system in the UK.

Contained farming systems are also being used to help farmers put down roots in places that would otherwise be unsuitable for production. Green Lion Farm Ltd. of Armstrong, B.C., expects to have 16 growing machines from CubicFarm Systems Corp. of Vancouver in operation this spring. Green Lion owners Mark and Lesley Van Deursen saw CubicFarm’s growing machines as a way to add herbs and leafy greens to their existing organic forage operation  and contribute to local food security.

The insulated growing chambers are about the size of a 40-foot shipping container. The operating system is embedded in the walls, freeing the interior space for a conveyor that carries more than 250 growing trays along an undulating path under life-giving light and nutrient-rich water. Workers access the crop at one end, harvesting mature plants and restocking trays with plugs for the next growing cycle. The system is ideal for plants no more than 10-inches tall, with tray configuration matched to crop.

The custom-made growing chambers are cost-effective for a small producer, averaging between $125,000 and $175,000 each. Production ranges from 6,240 heads of lettuce every 21 days or 20,640 plugs of herbs every 10 days. The productivity delivers sufficient cash flow to cover capital and operating costs. It’s also simple to operate, with adjustments to the growing environment made through the GrowLink farm management app.

“You can set up these container-style growing systems anywhere in the world and you don’t need the landbase,” Van Deursen says. “It really is quite awesome to be able to supply our local grocery store chains and restaurants with domestic produce.”

While the compact nature of the CubicFarm systems helps the Van Deursens make better use of their land in the interest of local food security, it also operates just a half-hour drive from one of the largest organic vegetable farms in the Okanagan. VegPro International Inc. of Quebec acquired 700 acres near Vernon, B.C., in 2017 to grow salad greens for markets in Western Canada. One of the site’s key attractions was the temperate climate and low pest pressure. 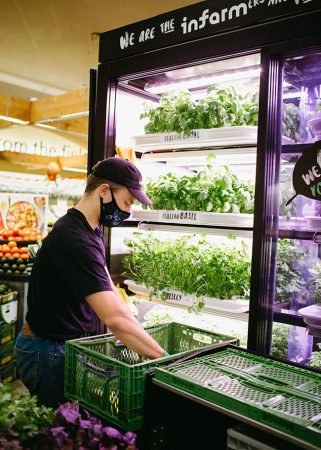 Container systems are independent of soil or natural light, preventing organic certification. Demand for organic produce means soil-based systems aren’t going away. Field producers shouldn’t fear the new alternative, according to Lenore Newman, director of the Food and Agriculture Institute at the University of the Fraser Valley in Chilliwack. Newman is also a member of B.C.’s government-appointed food security task force that examined the potential of agritech in meeting future needs.

“It’s not great for the field producers who are in the same category,” she says. “[But] the truth is, there’s a lot of field crops that are not going to work inside. So it’s not like field producers will be short of things to grow.”

The key opportunity for contained growing environments is closing the distance food has to travel to people’s tables. This is most evident for crops commonly consumed year-round, a demand now met by imports.

“It’s very interesting how fast the technology is evolving, and it does open up the potential that Canada could be self-sufficient in fresh greens, small fruits, small vegetables,” Newman says. “Everyone’s playing to see what will be the winning combination of size, location, crops.”

While there’s plenty of research that supports one-acre facilities in places like Japan and the Netherlands, there’s far less research into the economics of shipping containers or hyperlocal systems, such as InFarm.

James Eaves, an agricultural economist and professor in Laval University’s department of management, has studied the economics of vertical farms versus greenhouse production. Research three years ago found that start-up and operating costs are similar, while the gross profit is slightly higher for vertical farms. Reductions in LED lighting costs have only added to the advantages for high-value crops, making contained systems more attractive than greenhouses in many contexts.

“Throughout history, growers have always paid a very high premium for improvements in control. This is why I believe the indoor growing will disrupt much of the greenhouse market in Canada over the next decade,” Eaves says. “I’m hoping stakeholders see the writing on the wall before we lose the opportunity to lead in that new and incredibly large future market.”•