May 2, 2018  By Alberta Agriculture and Forestry 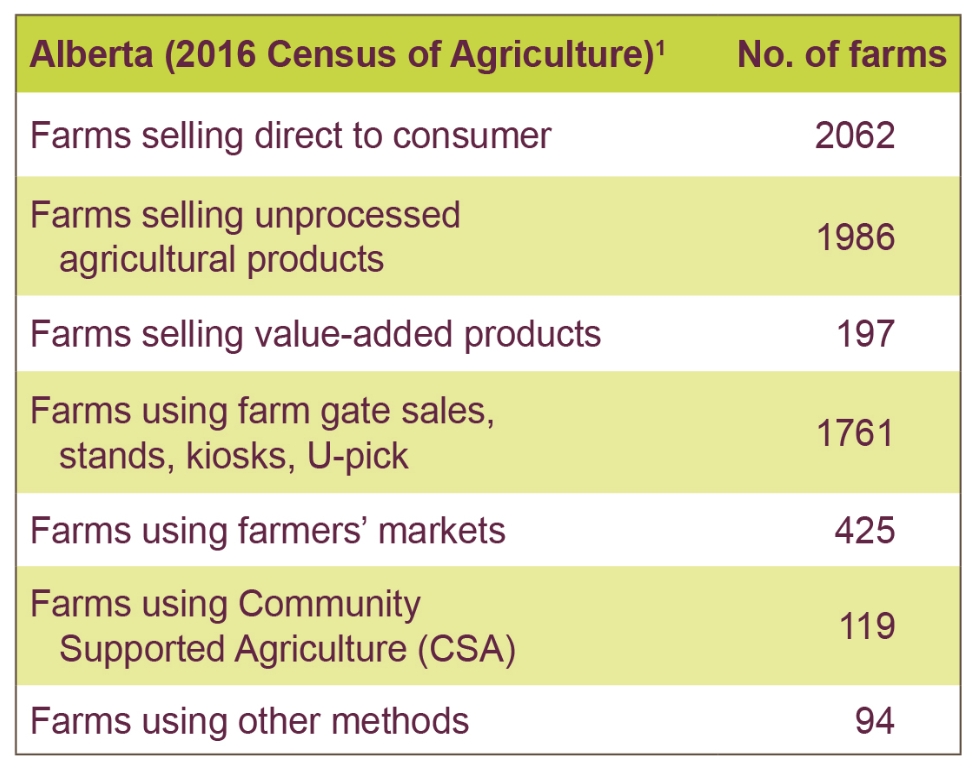 Alberta farms are seeing more opportunities to sell their products directly to consumers, as more people want to know where their food comes from and how it is produced.

“Local food sales through direct to consumer market channels have more than doubled since 2008,” says Christine Anderson, local foods specialist with AF. “We are expecting sales from this past year to reach $1.2 billion.”

The Study of Local Food Demand in Alberta 2016 found that food spending at farmers’ markets, farm retail, and restaurants serving local food in Alberta exceeded $1.5 billion in that year.

“That breaks down to one Alberta farm selling directly to consumers for every 1,972 Albertans,” says Anderson. “When compared to the national average of one direct to consumer farm for every 1,434 people, there is a clear opportunity for new farms to enter the direct sales market in Alberta.”

Of those 2,062 Alberta farms selling directly to consumers, 35 per cent were new entrants to direct to consumer market channels. Beef cattle farms represented the highest proportion of new entrants at 21 per cent, followed by apiculture at 12 per cent, and animal combination farming at 11 per cent.

Most farms, or 85 per cent, sold food and products directly to consumers either at a farm gate, stand, kiosk, or U-pick operation. About 20 per cent sold their product at farmers’ markets, and six per cent through CSA.

“Direct marketing farms also revealed a higher percentage of female operators, at 38 per cent, than other types of farms, at 31 per cent,” notes Anderson. “Interestingly, Alberta has more female direct marketing farm operators than the national average, which is 36 per cent.”

The data also showed that young operators who were under the age of 35 were more involved in farm direct marketing in Alberta: Nine per cent compared to eight per cent province-wide in all agriculture operations.

For a more information on opportunities in direct to consumer marketing, visit Explore Local or contact Christine Anderson local foods specialist with Alberta Agriculture and Forestry.