Insights into the latest techniques and technologies available to aid frost protection of fruit trees and berry crops across Canada. 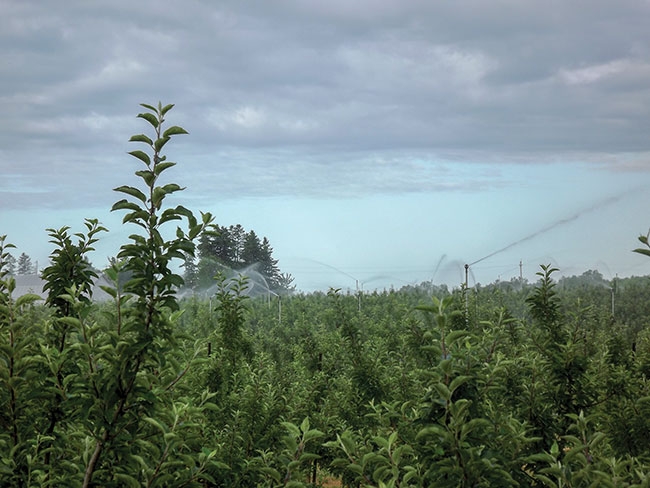 Wind machines are often used to mix air when the cold layer is trapped under a warmer layer of air.

Kathryn Carter, tender fruit and grape fruit crop specialist at the Ontario Ministry of Agriculture Food and Rural Affairs (OMAFRA), notes there have been a few severe frost events in the past few years that have impacted growers. For example, in 2015, 40 per cent of the total Ontario apple crop was lost due to a frost in late-May, with some areas severely hit. In 2012, approximately 80 per cent of Ontario’s apple crop was lost due to frost.

“A lot of the peach and apple crop were affected, but grapes were affected less as many of the vines had not broken dormancy,” she notes. “It seems that frost is certainly becoming an increasing issue for growers. Climate change is resulting in more erratic weather patterns and is causing significant temperature swings.”

Production insurance is obviously an option for growers but many want to do their best to prevent crop injury when they can. As the impending frost moved in during spring 2012, some Ontario grape and tree fruit producers used wind machines, and Carter notes that many other growers bought these machines afterwards to have them on hand.

One wind machine will cover about 15 acres, according to Karter, but she explains that they only work if it’s a radiation frost that creates an inversion layer (with warmer air above and colder air temperatures at ground level).

Those radiation frosts tend to occur on calm, clear nights, adds Amanda Green, tree fruit specialist with OMAFRA, based in Simcoe, Ont.
Carter says a few growers could still be using ‘cold air drain’ machines, which blow cold air upwards to keep air moving around blooms and prevent crystal formation. They are now available in tractor PTO- or engine-driven models and can be moved between orchards. However, these machines require the same air temperature layering, and a barrier to direct cold air towards them, which may in itself create a frost pocket. According to Green, she usually sees cold air drains used in low points in orchards (valleys, bowls) where cold air will pool and frost, therefore, tends to pool.

Green adds that in the event of a radiative frost, growers who don’t have wind machines or cold air drains could hire a helicopter to mix the inversion layers to warm the air down by the crop, but that is a very costly option.

Carter notes that some strawberry growers and a few apple growers in the province are employing micro-sprinklers on irrigation equipment to deal with frost. However, to do this growers need to already have that type of irrigation equipment, as well as a large water supply as water must be used continuously throughout a cold event.

Green adds that, “in other apple growing areas in North America, I have seen growers with both wind machines and micro-sprinklers, as micro-sprinklers don’t require an inversion layer to be effective. Overhead irrigation works to protect the crop by latent heat releasing when water changes state from liquid to solid. This works similarly to how steam can burn your hand as it condenses into a liquid. Another method to protecting your crop with irrigation is under the row irrigation. This would work similarly to overhead irrigation in that as the water changes state from liquid to solid, latent heat is released. It may not be as effective as overhead but there is less risk of freezing your crop if you run out of water as the water is not contacting the blossoms.”

Glen Lucas, B.C. Fruit Growers Association general manager, also notes that orchards in the Okanagan tend to be planted on hillsides and not the valley floor, so frost is avoided as it flows downhill and pools in the valley bottom.

“Where needed, wind machines are used to mix air when the cold layer is trapped under a warmer layer of air,” he says, adding that almost all growers carry the basic level of production insurance, which includes partial coverage for
frost damage.

Products and research
Currently, there are a number of research projects looking at solutions to mitigating the risk of frost. Dormant oils are being investigated at Ohio State University for frost protection in grapes and the ‘ABA’ hormone is being used to build freeze tolerance (winter injury as opposed to frost impact on buds) in vines.

Carter notes that scientists have tested other substances to protect against frost, including foliar zinc sprays, Pristine fungicide, and Promalin plant growth regulator. If ice-nucleating bacteria is present in the blossom (which makes ice form at higher temperatures), and if some products replace these bacteria or prevent it from growing, there may be some frost protection. But Carter notes this is not always the case. Promalin may also promote the formation of parthenocarpic fruit (without seeds), but a full crop is not likely to be set, and fruit would have limited shelf life with no seeds. Overall, the cost-potential benefit of these products needs to be closely analyzed.

Researchers at Washington State University (WSU) have developed a promising frost protection coating made with a cellulose by-product of paper processing. The team has received grants from the U.S. Department of Agriculture and the Washington Tree Fruit Research Commission to help fund further trials.

The unique solution was formulated by Xiao Zhang, associate professor at WSU Tri-Cities’ Bioproducts, Sciences and Engineering Laboratory. Collaborator Matthew Whiting, professor of horticulture at WSU’s Irrigated Agriculture Research and Extension Center, heard of Zhang’s work because they are both members of WSU’s multidisciplinary Center for Precision and Automated Agricultural Systems.

“I had studied tree fruit frost damage for many years and when I heard about his work, I approached Xiao about making some formulations suitable for fruit crops,” he says. “We set up trials in early 2017, applying the coating in research vineyards and to sweet cherry trees. We treated vines and branches with the solution and 48 hours later, brought those into the lab to evaluate hardiness in programmable freeze chambers. We had good results – the treated tissue could withstand lower temperatures than untreated.”

The solution acts as an insulating layer on plant tissue that both keeps the cold air out, says Whiting, but also keeps tissue heat inside. In 2018, they did more studies on grapes and cherries, and added apples as well. Studies continue on key factors that affect efficacy (for example, cellulose concentration) and commercialization of an associated product is coming.

“We are also looking at optimal application strategies,” Whiting reports. “This means timing but also application technology such as what sort of spray head is best. We do believe its efficacy is tied to having a good coating, so it may be that electrostatic application technology would be advantageous as it causes substances to wrap well around tissues. That will be researched in 2019.” He says electrostatic sprayers are not terribly expensive and that some growers have already switched to them for applying other crop protection products.