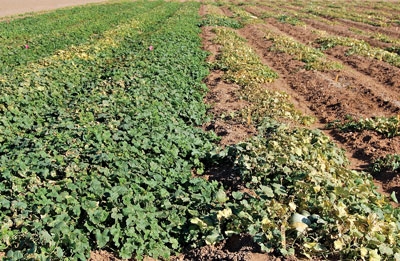 At a test site in Imperial Valley, Calif., ARS and university scientists are screening melons for CYSDV resistance. Plants on right are Indian melons; those on left are resistant accessions from India and Zimbabwe.

Organic potato growers may want to consider planting resistant varieties as an additional tactic in their efforts to control late blight.

Late blight is the number one threat for potato growers in British Columbia, particularly organic growers who only have one registered control. Many growers will either harvest right away or take the crop out if they find late blight in their potatoes because it is so difficult to treat.

“What we are trying to do is expand the integrated pest management toolbox to control disease,” says Brock Glover, the vegetable IPM co-ordinator for E.S. Cropconsult. “We are trying to add to farmers’ options.”

The 2010 study examined Island Sunshine (yellow) and Krantz (russet), varieties reported to have late blight resistance, against Norkotah Russet as an industry standard. In an effort to find alternatives to copper-based fungicides, each variety was treated with organic fungicides Parasol, Actinovate, and Sonata.

Parasol is a copper-based fungicide commonly used in organic potato production. Actinovate (Streptomyces lydicus) is registered as a biological fungicide for some crops in Canada, but not for potatoes. Sonata (Bacillus pumilus) is not currently registered in Canada, but is labelled for use on potatoes in the United States.

“We didn’t see a lot of results with Actinovate and Sonata,” says Glover. “If we were going to do it again, we would double the rate of application.”

Eliminating the Actinovate and Sonata trials allowed a specific comparison of the resistant potato varieties treated only with Parasol. The incidence of late blight was measured at harvest, and then again after six weeks of storage.

At harvest, levels of late blight were significantly higher in the Norkotah Russets, than in the resistant varieties. After six weeks in storage, late blight levels in Krantz increased, Norkotah stayed the same, and Island Sunshine actually decreased.

When evaluating yield, Island Sunshine could not measure up to Krantz and Norkotah. Despite the high levels of late blight in Norkotah, it yielded very well, and was comparable to Krantz.

Glover and his team plan to continue their work on alternative fungicides and resistant varieties, and are planning to expand to other potato varieties.

“We took a step in the right direction,” Glover says, looking at the results of the resistant varieties. “There is something we can build on.”