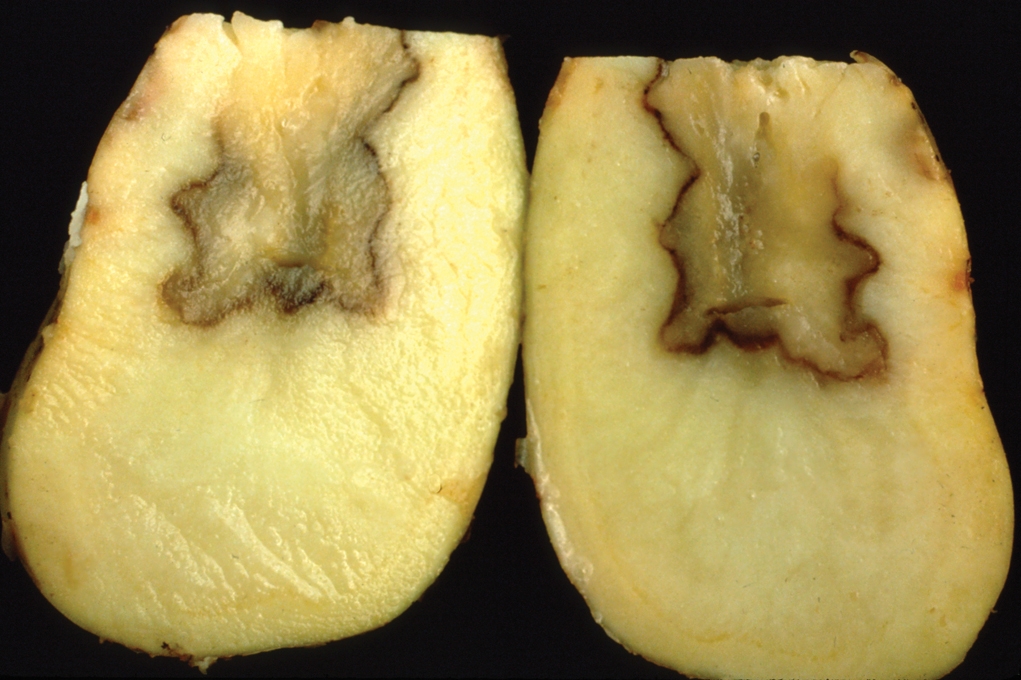 A close up of Blackleg Pith Lesion

April 19, 2017 – Healthy seed is a key factor in growing a quality potato crop. Several diseases affect seed tubers and have the potential to reduce plant stand early in the season.

It is extremely important to examine all seed lots carefully immediately after receiving the seed.
If you detect diseases or defects, check the standards set by the Canadian Food and Inspection Agency (CFIA). There are tolerances both for shipping and for receiving.

If diseases or defects appear to be a problem, growers may request that an inspector from CFIA re-inspect the seed, but this must be done within 48 hours of receiving the seed.

Disinfesting the seed cutters often is strongly recommended to reduce the spread of pathogens.

Fusarium dry rot (Fusarium spp)
This is the most common disease causing seed piece decay. Infected seed pieces may be partially or completely destroyed. A single sprout may emerge if only part of the seed piece is infected, but the resulting plant will be weak and will produce few marketable tubers.

Fusarium lesions are sunken and shriveled with concentric wrinkles. The internal rotted tissue is brown or grey to black, dry and crumbly. There is no noticeable smell. Fusarium often rots the center of the tuber, forming a cavity. The walls of the cavity are often lined with rotting tissue, producing spores that may be white or yellow or pink. Fusarium spores can contaminate healthy seed at cutting and spread the disease to healthy tubers. There are seed-piece treatments to prevent the spread of Fusarium during seed cutting, but no seed treatment can turn bad seed into good.

Rhizoctonia (R. solani)
Rhizoctonia can reduce plant stands and cause serious losses especially in cool springs. Affected tubers have sclerotia, which are black, irregular lumps stuck to the tuber skin. These black sclerotia germinate producing a fungal growth that infects sprouts causing dark brown cankers. Infections that kill sprouts before emergence cause severe damage. New sprouts will emerge, but they will be less vigorous than the first sprouts resulting in weak, uneven stands. Rhizoctonia is more prevalent if the weather is cool and wet. These conditions slow plant emergence and favour the growth of the fungus. Quadris in-furrow is a good management tool to control Rhizoctonia.

Late blight (Phytophthora infestans)
This is the most devastating fungal disease of potatoes. Infected seed is an important source of inoculum. Try to reduce the risk of planting infected seed by inspecting seed lots carefully. Look for slightly sunken, purplish areas of variable size on the surface of tubers. A granular, reddish brown dry rot develops under the skin. CFIA allows seed lots with one per cent of late blight and Fusarium infection combined. If there is one per cent late blight infection, you will end up with approximately 150 infected plants per acre. Some of the seed will rot before emergence, but cutting infected seed will spread the disease to healthy tubers. If more than one per cent of late blight is detected in a seed shipment, it is advisable not to plant the seed.

The fungicide Reason is registered as a seed treatment for late blight. Curzate applied at 80 per cent plant emergence is recommended if the seed originated in an area where late blight was problem the previous season.

If the growing season is cool and wet, it is impossible to eradicate the disease no matter how good the spray program. In 2016, late blight did not develop in Ontario, but it was detected in some seed-production areas both in Canada and in the US. Thus, check carefully for late blight when your seed shipment arrives.

Soft Rot (Pectobacterium carotovorum subsp. carotovorum)
Bacterial sot rot can cause serious losses. If about one per cent of the tubers in a seed lot show visible rot, excessive bacterial seed-piece decay may develop. The rotted tissues are wet and cream to tan in colour with a soft, granular consistency. Rotted tissues are sharply delineated from healthy ones by a blackish border. Secondary bacteria invade infected tubers rapidly causing a fishy smell.

Healthy seed tubers may be infected during cutting, and infected tubers will rot rapidly once planted. There are no seed treatments to control soft rot.

The Old Blackleg (Pectobacterium atrosepticum)
Symptoms on tubers are sunken, circular, black, rotted lesions extending from the tuber stem end into the pith. Rotting tissue is cream-coloured, but darkens with time. In an advanced stage, the infected tissue turns greyish black, mushy and smelly. Blackleg is more common in cool, wet seasons with temperatures below 250 Celsius.

There is no seed treatment for blackleg. Grade out infected tubers and make sure you disinfest the seed cutter often to reduce the spread of the disease to healthy tubers.

The New Dickeya Blackleg (Dickeya dianthicola)
The symptoms of tubers infected with Dickeya are similar to those caused by the old blackleg. The only difference is that the rot is slimier.

Seed tubers infected with Dickeya may appear healthy when coming out of storages. Dickeya’s optimum temperature for development is above 250 Celsius. Tubers infected at harvest will not develop symptoms in seed storages.

When seed tubers with latent infection are planted in the spring, they will rot quickly when the soil temperature increases in June.

The new Dickeya blackleg is much more aggressive than the old blackleg, and tubers are not often invaded by the secondary bacteria that cause rotting tubers to smell fishy. Thus, Dickeya infected tubers are usually odorless.

A specific, DNA-based test is necessary to distinguish Dickeya from the old blackleg. A & L laboratories in London, Ont., conducts PCR tests to identify Dickeya dianthicola.

It bears repeating that disinfesting seed cutters often reduces the spread of the pathogens that cause seed piece decay. An ounce of prevention is worth a pound of cure. Plant healthy seed.