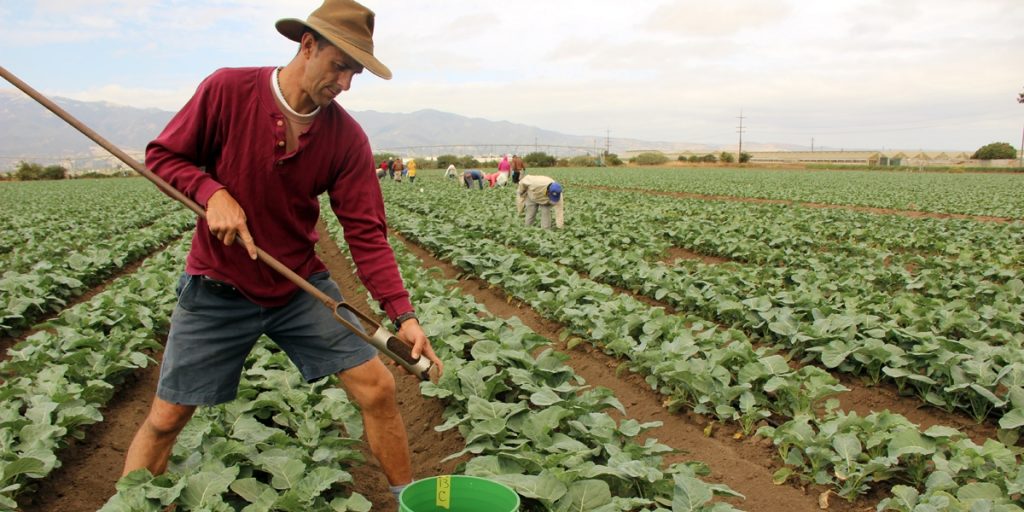 Soil organic matter has long been known to benefit farmers. The carbon in this organic matter acts as a food source for soil microbes, which then provide other nutrients to the crops grown. Microbes, insects and small soil critters produce materials that can improve soil structure and water retention. It’s a healthy ecosystem every farmer wants to encourage.

Measuring changes in soil organic matter can be a challenge in intensively tilled soil that is used for vegetable production. Even in production systems with less soil disturbance, soil organic matter changes slowly. But, Eric Brennan and Veronica Acosta-Martinez are testing for soil enzymes as early indicators of improvements in soil health in a long-term systems study.

Brennan manages the study in an area of California known as the “Salad Bowl of the World.” The Salinas Valley has high-input, organic vegetable production systems. “Farms in Salinas usually need to produce two or more vegetable crops per field annually to be profitable,” says Brennan. “This production intensity complicates the adoption of winter cover cropping. This is why many farmers in this region prefer to use compost to add large amounts of organic matter to the soil.”

Specifically, the team compared farming systems that received different amounts and types of organic matter. The sources were from compost and cover crops. They recently published their results in the Soil Science Society of America Journal.

“Our results on soil enzyme activity illustrate the importance of frequent cover-cropping in tillage-intensive, organic vegetable production,” says Brennan. “This raises questions about the sustainability of organic and conventional vegetable systems if cover crops are seldom used. We need to find innovative strategies to help farmers increase cover cropping. The practice is shown to improve soil health. It also provides other benefits like reducing nitrogen leaching into ground water.”

It’s not that organic or conventional farmers in this region are against cover cropping. It’s that their use can complicate many aspects of vegetable production.

Brennan’s study showed that cover cropping annually – no matter the type of plant grown – greatly benefits the soil. The study found that annual inputs of compost have relatively small benefits. There was an increase in microbial activity with compost, but not as much as with annual cover crops.

There are some caveats in the study. This research was conducted in a loamy sand soil in Salinas Valley. Organic farmers in different regions may have different results. Using different types of fertilizers could impact results, as well.

“The growing body of information from this long-term trial challenges the overly-simplistic notion that certified organic management improves soil health or quality,” says Brennan. He adds that the USDA organic standards require that certified farms show that their tillage and cultivation practices maintain or improve soil conditions. This refers to physical, chemical and biological factors. It also refers to minimizing soil erosion, which can worsen with intensive tilling.

The team hopes that future research will focus on different soil types, such a clay or loam soil. Evaluating changes over shorter increments would provide useful data, too. The soil enzyme data tells one part of the interesting story of this relatively long-term experiment.

Read more about this research in the Soil Science Society of America Journal. This research was funded primarily by the USDA-ARS, but also received two years of initial funding from a Specialty Crops grant from the California Department of Food and Agriculture.

To watch a five-minute video of Eric Brennan explaining the Salad Bowl of the World, visit youtube.com/watch?v=M-8tCXXKqNA.