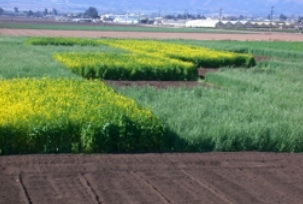 February 4, 2013 – Farmers can fine-tune their use of cover crops to help manage costs and maximize benefits in commercial organic production systems, according to U.S. Department of Agriculture (USDA) scientists.

The researcher selected three winter cover crops often grown in the Salinas, CA, area — rye, mustard, and a legume-rye mix — and planted each cover crop using either a typical seeding rate or a seeding rate that was three times higher. Seeding rates can influence a cover crop’s ability to smother weeds.

During lettuce and broccoli production, Brennan ensured all systems received the same fertilizer and irrigation inputs and pest management.

The long-term study also provided Brennan with more data about year-to-year yield variations in the legume-rye mix, including why legumes, which make up most of the seed costs, are not consistently abundant. Brennan thinks cooler early-season weather helps legumes compete with the rye. So when a hot and dry autumn is expected, producers might want to use a rye cover crop and skip spending the money on a cover crop with legumes.