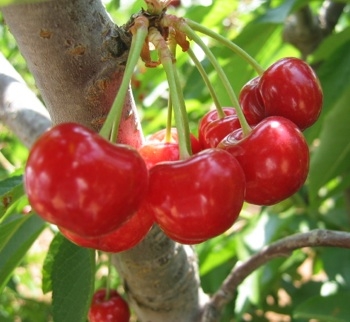 Police are helping farmers guard their fruit & vegetable crops, including cherries, as thefts from farms increases in Spain.

Crops and cops are converging along Spain’s journey through economic crisis: People enduring hardship are stealing the earth’s bounty from farmers to help get by from day to day.

Police have added the patrolling of farmland – sometimes on horseback – to their list of daily tasks. Farmers in some areas are teaming up to carry out nighttime patrols on their own.

In villages near farming areas, several thousand paramilitary Civil Guards, regional and local police are even setting up checkpoints to sniff out not drugs or drunken drivers but stolen fruit or farming equipment, like copper wire used in irrigation systems. The Civil Guard says sometimes its officers mount “cage operations” – sealing off whole villages to check cars and trucks for, say, pilfered pears.

The stolen goods are mainly for resale: The food ends up in small roving street markets and the metal goes to scrap dealers. Last year alone more than 20,000 thefts were reported at Spanish farms. The

Interior Ministry says it has no comparative figures from other years, or for so far in 2012. But authorities and farm groups blame the thefts on Spain’s economic crisis and say they are a big enough problem for the patrols, which began last season, to stay in force this year.

Here in Sant Climent, a village of 4,000 just outside Barcelona in the northeastern Catalonia region, the booty this time of year is cherries – dark red, shiny and sweet – dangling like ornaments from stubby trees in orchards rising up the slopes of a river valley. They’re everywhere, with people selling them from their front doorsteps and on stands inside bars for $4.50 a pound. A drawing of a cherry adorns the mayor’s business card.

What is happening is hardly an invasion of starving unemployed people gorging themselves on cherries and trudging back into town with red-stain criminal evidence all over them. Nor is Spain’s agricultural sector, which accounts for about three per cent of GDP, in jeopardy. But the theft reflects a real problem for Spain’s farmers and is a reflection of how harsh times are making ordinary people turn to crime.

“This has emerged because of social alarm. Because of the crisis, crime is up,” said the local police chief, Ernesto Banos. “And when cherry season comes around, people say, what now, cherries? OK, let’s go get them.”

The usual suspects can be surprising, or not.

In Spain, theft from farms – an unguarded field is an easy target – has always been around to some degree.

“But the increase that has taken place since the crisis started a few years ago has been spectacular,” said Estrella Larrazabal, spokeswoman for a farm association called Asaja. “Thieves take anything they can get their hands on.”

And things have happened in the Spanish countryside that make it look like the Wild West, or in some cases, Wall Street.

A rancher in central Spain went out one morning to view his 200-head herd of cattle and found two prized calves, which had just been released into the pack, shot in the head at point-blank range, and perfectly slaughtered. They were to have been prized breeders. But only the bony carcasses, with heads attached, remained in the muddy field.

“Those animals were phenomenal. They were spectacular. Really fat, very well treated, and after five or six days in the field, they killed them,” said the rancher, Eulogio Morales.

A farmer in Cordoba caught some men stealing plowing equipment from him. They were arrested, tried, convicted and fined $115 each. But they came back to his farm repeatedly demanding he pay the fine, and eventually threatened to kill him if he did not. The farmer, Ignacio Fernandez de Mesa, wore a hidden recording device during the last showdown, and nabbed them. A new trial on the death threat charge is pending.

“I stood up to them,” Fernandez de Mesa said. “I was waiting for them.”

Sheep rancher and lemon grower Vicente Carrion, head of the local branch of a farm lobby in the lush eastern region of Murcia, said thieves plan their hits according to what crops are getting good prices. So they are like futures traders, only instead of monitoring oil or gold, they watch artichoke or orange prices.

“If there is no price, they don’t touch it.” Carrion said. “Prices are not stable over the course of the year. When they peak, that is when they strike.”

Carrion says he knows of cases where gangs have stolen up to 5,000 kilos (2.3 tons) of oranges in one go. They act in broad daylight, picking the fruit under the thick cover of leafy groves, packing them in crates and loading them in trucks.

“At night, they act when the moon is full. It is bright. They sneak in and steal your artichokes,” Carrion said.

In Sant Climente, police say that every night they man checkpoints looking for stolen countryside goodies. The town is small, so strangers’ faces stand out, and officers also know what kind of vehicles to look out for: “Usually beaten up old vans,” said Joan Prunera, a Catalan regional police chief from a neighbouring town who is helping out with the patrols. Minutes after he spoke, a farmer phoned in a tip: Someone was out there trying to sell a chain saw and an electrical generator, both apparently stolen.

High up on a hill amid a grove of some 1,500 cherry trees, their trunks about the thickness of a man’s shin, grower Domenec Tugas and his wife Pilar patiently pick cherries. They grow six varieties, all of which probably look the same to non-cherry people. He laments the need for the police patrols that make their way up into his land in all- terrain vehicles on narrow, unpaved roads.

“People have always stolen a bit. You are used to that. But with the crisis it has gone up,” said Tugas, a ruddy-cheeked man of 69 with an easy smile. He wore a straw hat against a hot, hazy sun, the air thick and muggy. He said that just last weekend he called in police to scare off two young guys on a motorcycle who were helping themselves to his fruit.

But there is one intruder he cannot fight, at least not on his own.

“Wild boars. They weigh up to 90 kilos (200 pounds). They come in and ram into the trees to knock them down,” Tugas said. “It is for their little ones to eat. They love cherries.”