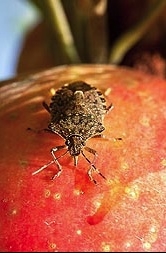 January 7, 2013 – First detected in the United States a decade ago, the brown marmorated stink bug (BMSB) is now in at least 39 states, is wreaking havoc in homes and gardens, and is a major economic threat to orchard fruits, garden vegetables and row crops.

It’s no wonder the U.S. Department of Agriculture (USDA) ranks this pest as its top “invasive insect of interest.”

But help may be on the way: USDA scientists at the Agricultural Research Service (ARS) Invasive Insect Biocontrol and Behavior Laboratory in Beltsville, MD, are searching for ways to control the stink bug by deciphering its genetic toolkit, studying the pheromones it releases, and evaluating potential attractants for use in commercial traps. ARS is the USDA’s principal intramural scientific research agency, and this research supports the USDA priority of promoting international food security.

ARS chemist Ashot Khrimian at the Beltsville lab led a team that identified an “aggregation pheromone” that shows promise as an early-season attractant. The pheromone, released by male stink bugs when they feed, attracts males, females and nymphs (the immature form of the stink bugs) to feeding sites. When mixed with other structurally related chemicals called stereoisomers, the pheromone is relatively simple to synthesize.

Khrimian and Aijun Zhang, an ARS chemist at Beltsville, are completing the identification of exact stereoisomers that the stink bugs are releasing to attract other stink bugs. The mixture and its components also were evaluated by ARS researchers who set up field traps at different sites and with the different candidate formulas, and then counted the numbers of stink bugs they attracted. Data from those field trials, conducted in the summer of 2012, will be added to a previously filed provisional patent application.

Dawn Gundersen-Rindal, the Beltsville lab’s research leader, is also looking for genes that might make the stink bug vulnerable to biopesticides or specific treatments that won’t harm beneficial insects. In a separate effort, she is working with scientists at Baylor College of Medicine in Houston, Texas, to sequence the stink bug’s genome. Sequencing the genome will tell scientists about genes critical to the stink bug’s survival and may give them new ways to control the pest.

Read more about this research in the January 2013 issue of Agricultural Research magazine.