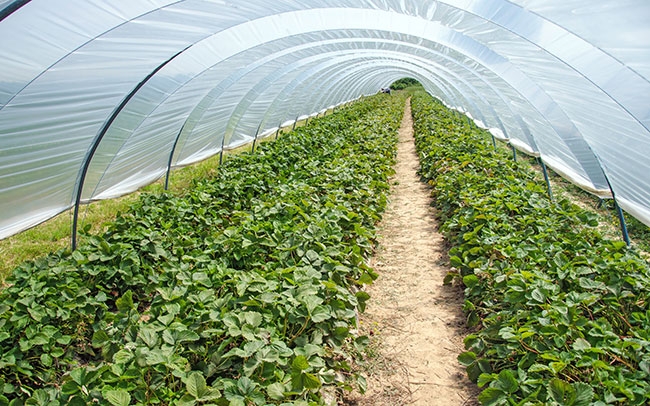 With new plastic options coming to market that help to reduce the volume of waste, looking at tunnels for growing berries has seen an increase in interest. Photo: Fotolia

Using tunnels to provide a more consistent environment for raspberries and strawberries has been employed around the world, but less so in North America. Kathy Demchak from the Department of Plant Science at Penn State University has surveyed growers and conducted research on the use of tunnels in growing fresh-market strawberries and raspberries to help growers determine if the option is viable in their own field.

“Tunnels do provide some degree of control over the environment,” says Demchak.

That control is the number one reason growers turn to tunnels as a management option, but control comes with a price tag. Low tunnels, which cover the length of a bed, are the most affordable, but they only last one growing season and protect the plants (not the workers) from the elements. Their cousin, the high tunnel, can be single or multi-bay.

Multi-bay structures are typically bays of 200 to 300 feet long and 24 feet wide that are then attached or tied together providing more structural integrity. Like single-bay tunnels, the hoop frames are covered with six to eight mil clear plastic that will generally last about three growing seasons. Proper installation is the prime dictator of longer plastic life. Snow loads and wind may require taking the plastic down in some regions but single bay tunnels can usually stay in place year-round.

With new plastic options coming to market that help to reduce the volume of waste, looking at tunnels for growing berries has seen an increase in interest. Growers in Canada can learn from the experiences of others before making the commitment.

“Fruit appearance was the number one reason,” says Demchak of why growers were using tunnels in both everbearing and June bearing berries.

While the high tunnels cost more than low-tunnels, most everbearing growers reported payback in two to three years. The ability to work within the structure at any time and the controlled environment lengthens the harvest season, increases yields, creates a higher percentage of marketable fruit, allows for longer shelf life of the everbearing berries and helps making growing organic and pesticide-free easier.

Demachak recommends using integrated pest management (IPM) techniques in the tunnel environment and found that implementation within a high tunnel structure was quite successful.

Spider mites were mentioned as an issue for some growers.

“Our recommendation for that is to release predatory mites when first seen and just keep scouting,” she says.

On the downside, the roots of strawberry plants in tunnels were exposed to higher levels of salt, perhaps due to the lack of snow or rainwater leaching it away.

“You won’t want to grow strawberries [in a tunnel] after something like tomatoes,” she says. “We do need to work out the production systems.”

Demchak feels that excess salinity could potentially be leached out of tunnel areas through increased irrigation.

While some growers felt there was an increase to management time in checking temperatures and monitoring the environment within the tunnel, Demchak notes the management was minimal and that it was not necessarily taking more time, just adding in a different task.

Some growers also felt the benefits didn’t justify the costs of high tunnels in strawberries and made the switch to using the tunnels for higher value crops such as tomatoes. While the off-season berries were a plus, finding a market for them proved to be somewhat of a challenge as consumers weren’t expecting locally-grown berries at that time. If growers can achieve higher selling prices and markets for off-season everbearing strawberries, they may well find that the costs of tunnels are worthwhile.

Considering tunnels for raspberries
Raspberry growers were also surveyed about their use of high tunnels. Their primary reason for using the structures was to increase yield, followed by a desire for improved appearance and the ability to harvest in the rain. Very few raspberry growers discontinued growing raspberries in tunnels or planned to decrease their tunnel acreage.

“The number of growers planning to increase their acreage significantly outpaced those planning to decrease acreage,” Demchak says.

In Philadelphia, growers saw two to four times an increase in yield.

“When you’ve got them in a tunnel, you’ve really got them in an optimal growing season for 50 per cent of the time,” Demchak notes. “We get a higher yield that first year and it will go up from there.”

Water quality becomes a larger issue in a controlled environment.

“We recommend to growers that they test their water source,” she says, and adds that tissue testing each year is important to see if fertilizer rates are right.

There was also a major decrease in diseases in the tunnel combined with another potential plus of harvests occurring two to three weeks earlier.

“We’re finding generally if it [a variety] works good in the field, it’s good for a tunnel in your area,” she notes. “We never had anything do worse in a tunnel.”

Some growers were concerned about pollination but Demchak found that bumblebees liked the tunnels. Honeybees however did seem to get confused and sometimes caught in the peak of the structure. She advised to provide nests for both mason and bumblebees within the high-tunnel structures.

Similar to strawberries, spider mites were an issue, but the same rules apply. Scouting and releasing of predatory mites early will control the pests. Another pest, spotted wing drosophila (SWD) was lower in raspberries grown in the tunnels than seen in the field. Demchak feels the ability to harvest daily may have prompted this positive result. However, the fact that SWD was present at all impacted longer shelf life and pesticide-free qualities. With IPM methods, Demchak anticipates even greater control of the persistent pest.

Unexpected was the fierce virility of the raspberry canes. Growth was significantly faster in the high tunnel environment.

“Keep a minimum of seven feet between rows,” notes Demchak. “Plants will get away from you. We use a simple support trellis or like a V row.”

To use tunnels or not for berry growing is a challenging question. While fruit quality is greatly enhanced, solid grower practices must be applied in order to maintain that quality and ensure markets for early and late-season fruit to make high tunnels a financially viable option.