Features Fruit Production
Succulent strawberries throughout most of the year 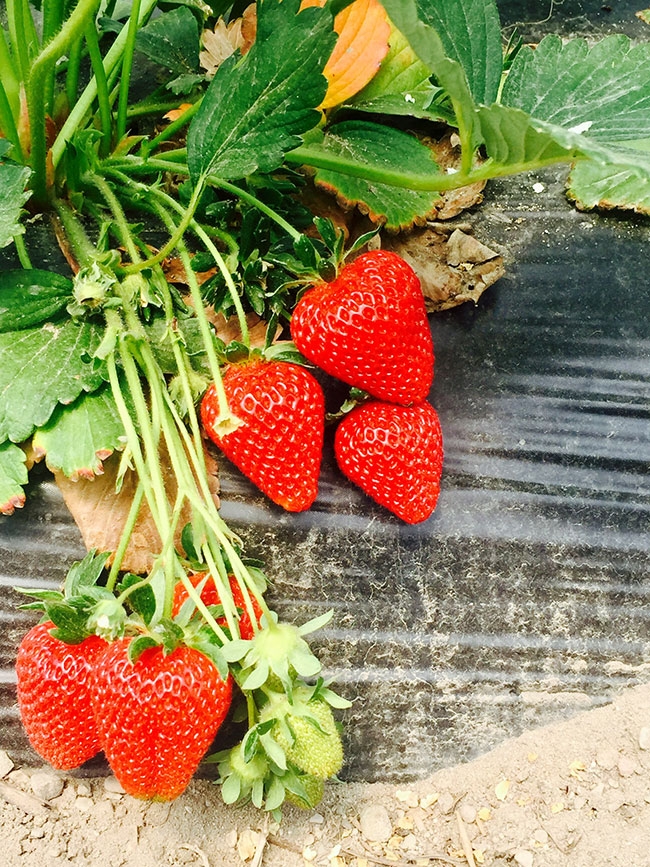 Demand for fresh local strawberries has been growing in Canada and the country’s day-neutral strawberry industry is growing to meet the need. Contributed photo

Kevin Schooley agrees that it’s the local angle, as well as better taste and sweetness provided by quick harvest-to-purchase timelines compared to imports, which is fueling the expansion. Indeed, the executive director of the North American Strawberry Growers’ Association and Ontario Berry Growers Association puts the increase in those growing day-neutrals across Canada over the last five years at 20 to 30 per cent, and believes there is always the potential for more new growers. However, Schooley also notes that growers with larger acreages who sell to wholesale outlets will likely take a year or two right now to evaluate the impact of higher minimum wage before expanding further – and so might growers who do direct sales.

Brad and Terri Raymont, owners of Raymont’s Berries in Cottam, Ont., sell strawberries to wholesalers and also directly from their farm. The Raymonts won a regional 2016 Premier’s Award for Agri-Food Innovation Excellence for their work with day-neutrals, which began about 10 years ago. They have supported the plants’ extended growing season by using black mulch and row covers to warm the soil, as well as high tunnels for early and late season plant protection. However, Brad says he will also plant some June-bearing strawberries in 2018 (something he hasn’t done in a while) as he’s found that over the last few cold and wet springs, the day-neutrals didn’t fare very well early in the season.

Because day-neutral berries have several harvests a season, they are much more prone to insect attack than June-flowering conventional varieties.

“Pests like tarnished plant bug are everywhere all summer,” notes Craig Hunter, who leads the crop protection file at the Ontario Fruit and Vegetable Growers’ Association. “They are difficult to control, and the pre-harvest intervals are long for most products. Hence, the timing to treat and the wait to harvest can be challenging.”

On top of this, Hunter says day-neutral berry growers also face the potential loss of several key fungicides due to current re-evaluations by the Pest Management Regulatory Agency (PMRA).

“This could put serious pressure on the remainder, all of which are prone to pest resistance,” he explains, adding “there are very few new compounds on the horizon, so pest control will become an even greater challenge.”

Demand for fresh local strawberries has been growing in Canada and the country’s day-neutral strawberry industry is growing to meet the need.

Biocontrol methods are being actively employed for berries and more across Canada. See our recent story here – https://www.fruitandveggie.com/insects/biocontrol-expanding-in-berry-fields-20390 – on biocontrol methods being used for control of thrips and more in day-neutral strawberries at Tigchelaar’s Farms, with land in Jordan and Vineland, Ont.

Pests that attack day-neutral berries are also being studied through the U.S-based

TunnelBerries Project, a large initiative now entering its third year. Research spans across many production aspects relating to the use of low tunnels and high tunnels in long-season strawberries, raspberries and blackberries, at the University of New Hampshire (UNH) Woodman Horticultural Research Farm and other university and U.S. Department of Agriculture sites in Maryland, Minnesota, North Carolina and New York. At UNH specifically, researchers are examining yield and fruiting duration of day-neutral strawberry varieties under different mulches, as well as how much of a role low tunnels play in improving berry quality (and which low-tunnel plastics provide better benefits).

A pest control device developed by Dr. Tracy Leskey – a USDA entomology research leader for innovative fruit production, improvement and protection based in Kearneysville, WV – is being evaluated for effectiveness at some TunnelBerries sites. The device consists of a red plastic sphere that is visually attractive to spotted wing drosophila (SWD), with a top-loaded coating (containing a feeding stimulant and a pesticide) that runs down the surface over time.

In Alberta, day-neutral strawberry growers don’t have the same SWD pressure that other regions of Canada do, but it’s still a concern, says Robert Spencer, commercial horticulture specialist with Alberta Agriculture & Forestry (AAF).

“It tends to show up in late August when raspberries and day-neutral strawberries are in season,” he explains. “Tarnished plant bug is a big concern because it also feeds on canola and it’s also hard to get chemistry that fits in a day-neutral system. There are a few other pests as well.”

Spencer says there are likely dozens of Alberta berry growers cultivating day-neutral strawberries but only a few use high tunnels, partly due to the high winds that are common in Alberta. In 2016, AAF held a field day on day-neutral and June strawberry production, in 2017 a workshop, and in March 2018, it hosted a question and answer session that focussed mostly on day-neutrals.

SWD, thrips, aphids and more are concerns in British Columbia, where about 70 per cent of the approximately 50 strawberry growers now grow day-neutrals on at least part of their land. Alf Krause – owner of Krause Berry Farms in Langley and vice president at the BC Strawberry Growers Association – grows half June strawberries and half day-neutral. Krause says industry acreage of day-neutrals really started growing a few years ago when the last main B.C. berry processor stopped accepting strawberries and oversupply issues erupted around June.

“Growers had to find new markets and also looked at extending the season,” he says.

He’s seen a few using high tunnels, but says most use black plastic for heat retention in the spring and fall.

Because day-neutrals have a short shelf life and sales across Canada are mostly direct, Krause and Spenser say that competition with greenhouses growing day-neutral berries is not an issue. There is one grower in B.C. (Affinor) gearing up to grow them in a vertical system, and two operating in Ontario (Mucci Farms in King City since 2016 and Orangeline in Leamington since 2011).

In Alberta, Spencer says growers plant mostly Seascape plus some Albion. In Ontario, Raymont uses both these varieties, and Krause says about 80 per cent of B.C. growers use Albion. No matter the day-neutral variety, propagation is a challenge because these plants put energy into fruit production rather than runners. At the Simcoe Research Station, long-time strawberry breeder and University of Guelph professor emeritus Dr. Adam Dale and his team are working on propagating day-neutral varieties from seed.

Overview of day-neutral strawberries
Day-neutral strawberry plants produce flower buds regardless of the hours of sunlight, about three months after planting. Cultivars can potentially be harvested about every six weeks. They will initiate flower buds during the entire growth season, assuming temperatures do not become too high (day/night temperatures at or above 29 C are the upper limit at which they will produce flowers). They flower and set strawberries whenever the temperature is 2 C to 29 C.

Day-neutral strawberries should be grown as annuals, plowed down the spring after planting and replanted every year as yields from those left in the ground tend to decline dramatically in successive years. They are often planted using the hill system.