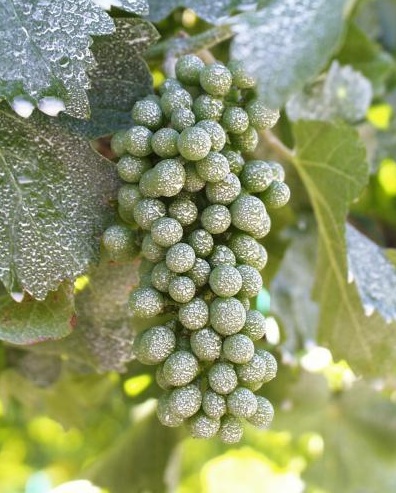 Winemakers may see benefits using foliar particle film
Deficit irrigation is an agricultural
technique used to achieve a variety of results depending on the crop.

March 4, 2009, Parma, ID—Deficit irrigation is an agricultural technique used to achieve a variety of results depending on the crop. For white wine grapes, it balances the crop load by limiting the canopy size so there aren’t too many leaves shading the grapes. For red wine grapes, deficit irrigation again limits canopy size, but also affects berry components associated with wine quality.

A drawback of this canopy-limiting process is that fruit can become sunburned, especially under sunny, arid conditions, which can adversely affect productivity and fruit maturity. A particle film, which increases light reflection and reduces leaf temperature, has been tested on several crops. It acts as a sunscreen by reflecting the harmful ultraviolet rays off of the leaves and fruit, but still allows the right radiation for photosynthesis through to nourish the plant.

Krista Shellie of the U.S. Department of Agriculture led a study to learn more about foliar particle film’s effects on wine grapes when the grapes were grown under varying levels of water stress. The study, published in the American Society for Horticultural Science journal HortScience, also noted the particle film’s effect on grape yield and maturity. Grapes were grown according to commercial practice with the exception of the watering schedule and application of the particle film. Film effectiveness was monitored by measuring the amount of leaf gas exchange, but the particle film’s influence on this process seemed to differ depending on the amount of water stress the vine was experiencing.

The study’s findings support a classification of these grapes as anisohydric, meaning the plant is affected by the amount of soil moisture available and is unable to restrict its own water loss under dry soil conditions. This is also known as a “drought-avoiding” classification.

Particle film may increase the yield potential of the vines, but it did not protect against sun damage when vines were grown under deficit irrigation. The cost-benefit of particle film must be decided by growers and wine makers and its potential benefit of more uniform fruit maturity, increased yield, and berry size.

The complete study and abstract are available on the ASHS HortScience electronic journal web site at http://hortsci.ashspublications.org/cgi/content/abstract/43/5/1392.