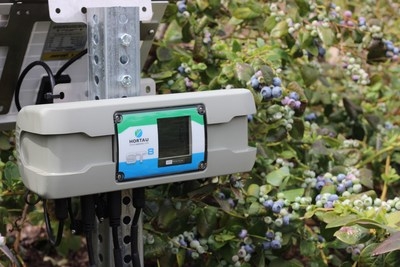 Gestion AgrIA has received a financial contribution of $4.7 million from the government of Quebec, through the Green Fund, to complete a key research project that is helping growers boost their productivity while significantly reducing greenhouse gas (GHG) emissions.

AgrIA is a not for profit founded by three partners: Hortau, Les Fermes Tri-Jardins, and Houblon des Jarrets Noirs. It draws on the knowledge, expertise, and know-how of a large number of businesses, research institutions, technology transfer centers, and agricultural producers.

“Let’s remember,” said Jocelyn Boudreau, co-founder and CEO of Hortau, “that agriculture uses 40 per cent of earth’s habitable land and 70 per cent of its water resources. The global population will reach 10 billion in 2050 and, according to the UN, if we do not manage to produce more food with less water and less farmland, it will take two planets to feed everyone.”

Hortau and its partners have been working since late 2017 on developing the first predictive and global monitoring tool for crop production in order to substantially boost yields and productivity while reducing inputs such as water, fertilizer, pesticides, and energy.

The new, fully digital multivariate technology redefines the needs, diagnosis methods, and approaches used in agronomic interventions through real-time, continuous measurements and techniques from the field of artificial intelligence (AI), including machine learning.

It also significantly reduces the inputs, pollution, and greenhouse gases for a given harvest volume. Hortau has been developing the approach since 2008, making it the Internet of Things (IoT) pioneer in the agricultural sector.

Added Boudreau, “Our new technology has exciting environmental and economic benefits for growers and will benefit the many Canadian businesses that serve our Lévis production center.”

Gestion AgrIA’s overall budget is $13 million and contributes to the broader Hortau project, whose budget is $20 million. With the company’s anticipated growth, Hortau and its numerous suppliers are expected to create plenty of high quality jobs, both at Hortau and with its many suppliers.