In the beginning of March, farmers were hit both by high demand for produce and sudden restrictions on where they could sell it. Here’s how some growers adapted to the situation. 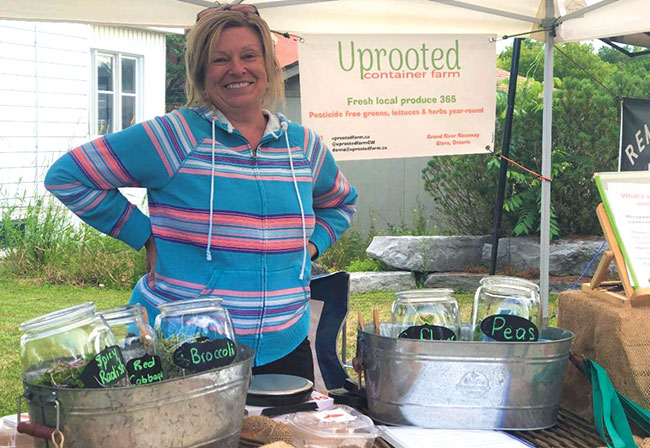 After the farmers’ market she usually sells to closed, Donna Pardy moved to two online platforms to sell produce instead. Photo courtesy of Donna Pardy.

March 13 was the day stores ran out of potatoes. That’s when the Pfennings Organic Farm went into overdrive, and worked weekends and evenings to try to meet demand.

“The sort of panic buying of potatoes is something I never expected I would see in my lifetime,” says Jenn Pfenning, the director of human resources, operations and marketing at the farm in New Hamburg, Ont. Besides one Sunday off, the workers at the farm worked two straight weeks to send extra deliveries to retailers.

“It’s kind of like Christmas, Easter and Thanksgiving all rolled into one except that there is no party at the end of it and a little bit of stress,” she says. “Well, a lot of stress, to be honest.”

“It’s kind of like Christmas, Easter and Thanksgiving all rolled into one except that there is no party at the end of it and a little bit of stress,” she says. “Well, a lot of stress, to be honest.”

It wasn’t just the spike in demand that posed challenges. Pfenning was also writing new safety protocols on the fly for around 50 staff, and remained unsure when (or if, at one point) the usual 35 migrant workers from Jamaica would be coming. On top of that, a staff member had gone into quarantine.

They were one of the hundreds of farmers and growers affected when the federal and provincial governments introduced new measures to prevent the spread of COVID-19 this past March. As the outbreak changed almost every aspect of life in Canada, farmers too had to learn to adapt on short notice.

Shift from food services to retail

As restaurants, food courts, cafes and other food services closed, Canadians began buying groceries – a lot of them.

“The food service sector is worth $90 billion in Canada. It basically went from $90 billion to probably $20 billion over night,” says Sylvain Charlebois, a professor who studies food distribution, security and safety at Dalhousie University. Although consumption went down across the board, much of that spending moved to retail. “We have a retail industry that is conducting miracles every day now.”

It meant that the food industry suddenly had to readjust to more customers buying groceries and cooking more often than usual. Whether that becomes a habit that continues after the virus remains to be seen, Charlebois says.

A spike in online deliveries

Social distancing measures also brought many farmers online. Donna Pardy, the owner of Uprooted Farm – an indoor hydroponic farm in Elora, Ont. – usually sells her produce at the Guelph Farmers’ Market. At the beginning of the outbreak, though, the market was closed (it is scheduled to remain closed until April 30). Other clients of Uprooted Farm cancelled as well.

“I had a contract with a hydroponic system installer to provide plants for an open house of a system that they had installed,” she explains. “But now of course, the open house is cancelled.”

“If this were to continue for a long time, that might have to be something that I would consider doing permanently,” she says. She adds that online orders roughly doubled since the outbreak began.

“If this were to continue for a long time, [online delivery] might have to be something that I would consider doing permanently,” she says.

Charlesbois says only nine per cent of Canadians have previously bought a food product online, but he sees that number growing during the pandemic. Although it’s too early to be sure, it could form shopping habits that last even after the pandemic ends.

“That changes the dynamics,” he says. “They may complement some of their purchasing online with a visit to the farmers’ markets or to the local store close by, and that’s all they’re going to buy. So their focus [would] be in the produce section and they’re going to be expert at it.”

He says the pandemic has made Canadians realize that grocery stores are essentially “open systems” where anyone can come in. He was surprised to see the results of a Dalhousie survey showing that 65 per cent of Canadians were concerned about the risks of shopping in a grocery store.

“I think it could have a huge impact on what type of products is being sold, how it’s served, how it’s prepared,” he says. “The expectations are going to change for grocers and that’s going to work through the food chain up to the farmer eventually.” 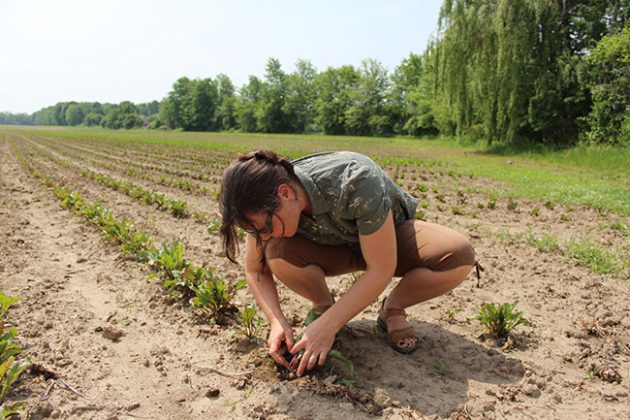 Jenn Pfenning (pictured) never expected to see the sort of panic buying of potatoes that happened during the initial COVID-19 outbreak in her lifetime. Photo courtesy of Pfenning’s Organic Vegetables.

At the Jungle Farm in Red Deer County, Alta., Leona and Blaine Staples usually run field trips in May and June for 5,000 students in schools all over their area. This March, schools across Alberta closed, so Leona decided to launch a YouTube series to provide virtual tours instead.

“I’ve only done one YouTube video so far, but my commitment is to do one every week,” Staples says. “I just love having the kids [get] that portion of the education. I’m missing out on it too, having that connection with the kids. It was my way of kind of addressing them.”

The videos will provide a field trip experience for those students who will miss going in person. The YouTube series might be a way to keep educating the public even after the COVID-19 crisis is over, she says. “It’s kind of fun! I get asked about stuff all the time – a lot of the farms that direct market do – and people just don’t know.”

Like other farms, though, she took on more work with fewer workers. Normally, by March, she would have seasonal agricultural workers, but she had to rely on casual workers instead. And, as with all farmers during the peak of the COVID-19 crisis, she lived with a sense of uncertainty about what businesses would remain open and who would be available to buy produce.

“Food production in our greenhouse is still going. As I’m speaking to you, I’m planting flowers,” she says. “That means I might have a whole lot of beautiful flowers but no one to buy them. I don’t know, but I don’t know when to stop.” 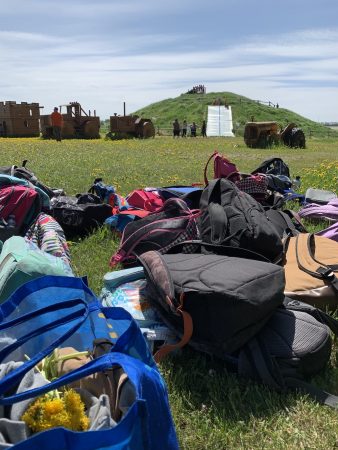 At the Jungle Farm, Leona and Blaine Staples usually run field trips in May and June for 5,000 students in schools all over their area. Photo courtesy of the Jungle Farm.

Luckily, farmers were less affected by the stringent health requirements brought on by social distancing measures. “Farmers have been socially distancing for a hundred years,” says Mike von Massow, an associate professor in the University of Guelph’s department of food, agricultural and resource economics. “It’s a relatively solitary endeavour.”

Despite having 50 employees, the Pfennings Organic Farm managed to do just that. Jenn Pfennings says they stopped accepting returns and that they told delivery drivers not to enter the building when they come back from a run. Employees were also split up from each other based on their job and lunches were staggered so they never gathered in large groups.

Social isolation on top of working long hours isn’t a recipe for high morale. Pfennings says constantly reminding employees to take care of themselves and holding (carefully distanced) meetings to update them went a long way to keeping spirits up.

“I bought them hot chocolate the other day. They were having a bit of a panic day, so I just grabbed some hot chocolate,” she says. “Sometimes it doesn’t take a lot to let somebody know that they’re appreciated and they matter.”

“I bought them hot chocolate the other day. They were having a bit of a panic day, so I just grabbed some hot chocolate,” she says. “Sometimes it doesn’t take a lot to let somebody know that they’re appreciated and they matter.”

Editor’s note: The interviews for this feature were conducted in March 2020.