Features Profiles Fruit
Getting to the root of winemaking: Nk’Mip Cellars

Backed by land and legacy, one winemaker hopes to leave both to the next generation. 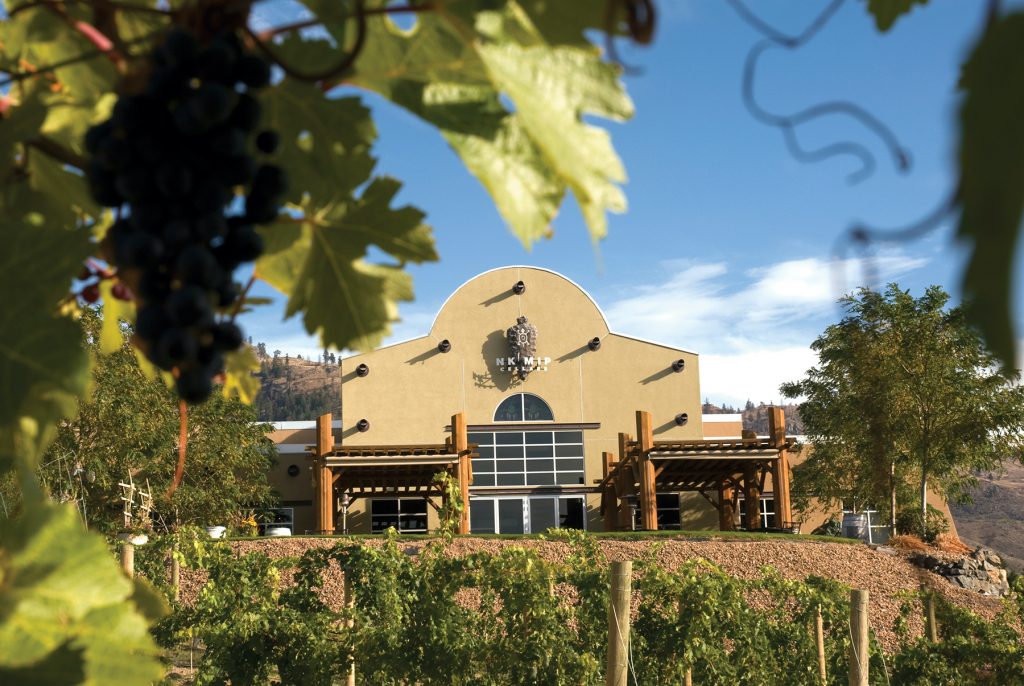 Nk'Mip Cellars's vineyards span the south Okanagan Valley and it is the first Indigenous-owned and operated winery in North America. Photos courtesy of Justin Hall.

When Justin Hall first started working at Nk’Mip Cellars in his early twenties, he was just looking for a job. Within a few weeks, it became his passion. Now, approximately 16 years later, he holds the role of winemaker at the winery located on the Osoyoos Indian Reserve in British Columbia, the first Indigenous-owned and operated winery in North America.

“Food and wine, it bites a lot of people,” says Hall, a member of the Osoyoos Indian Band (OIB). “It’s got a little bit of a majestic thing to it.” Once he became interested in the industry, Hall took the vineyard assistant and winery assistant programs through Okanagan University College before travelling to New Zealand to study viticulture and enology at a university there.

He also spent some time helping with a grape harvest at a much bigger facility in Australia. Having grown up on the Osoyoos Indian Reserve as part of a tight-knit community of approximately 540 band members, Hall says the experience in Australia gave him perspective and deepened his passion for his smaller community and winery. “Here, I get to follow the wines right to the very end and then meet the consumers and talk them through […] what I did all year.”

One of the things Hall says he enjoys the most about being a winemaker is the variety of work that each season brings, from start to end. “It’s almost like you’re raising a child. You’re starting it from the very root,” he says. 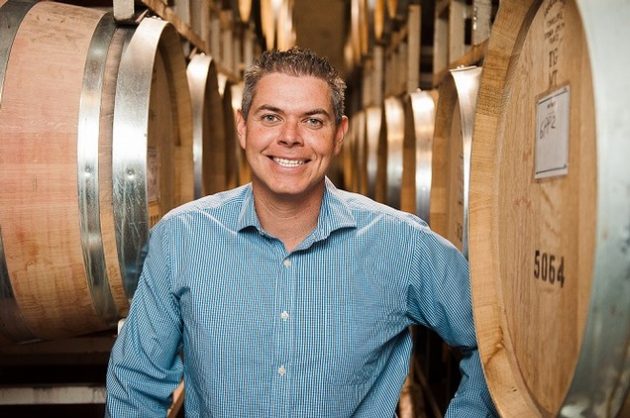 Once Justin Hall became interested in the industry, Hall took the vineyard assistant and winery assistant programs through Okanagan University College before travelling to New Zealand to study viticulture and enology at a university there.

Being involved throughout the whole process is not the only thing Hall values about Nk’Mip Cellars. He says he has a special love for the land because he grew up on it. With approximately 34,000 acres of land, the OIB uses roughly 1,700 acres to produce grapes from a wide range of varieties, including Merlot, Cabernet Sauvignon, Syrah, Pinot Noir, Cabernet Franc, Malbec, Pinot Blanc, Chardonnay, Riesling and Sauvignon Blanc.

It’s unique land too, situated in what Hall describes as a “true desert” with pine, antelope brush and sagebrush. The vineyards span the South Okanagan Valley and alternate between sandy and sandy loam soil. “You can really get a tight grasp on how large you want your canopy to be and, in turn, your end crop production,” Hall notes, saying the soil type allows for tight control over the amount of water that gets to the vine.

The temperatures are also indicators of the unique desert climate. Hall estimates they are one of the warmest regions in Canada, saying that one summer they rarely dropped below 40 C. Being in a valley, the temperature and the amount of sun exposure and elevation all vary from vineyard to vineyard. Hall says they make their growing plan accordingly, with red grape varieties in hotter regions and white grape varieties where it’s cooler. 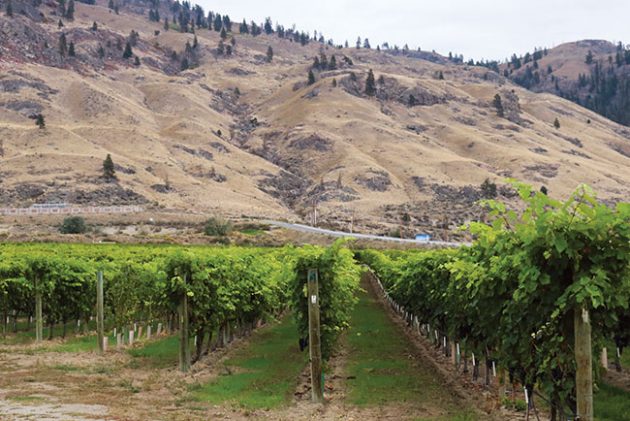 The vineyards span the South Okanagan Valley and alternate between sandy and sandy loam soil. Photos courtesy of Justin Hall.

The good thing about warm temperatures is the grapes always get ripe, even when an early frost comes like it did in the beginning of October last year. The difficulty is that they must ensure the canopy is big enough to prevent the grapes from getting dehydrated – and they still get cooler years sometimes where they must strip the vine. “Every year is different,” Hall says, “and somehow Mother Nature, just when you think you’re figuring stuff out, throws you a curveball.”

“Every year is different,” Hall says, “and somehow Mother Nature, just when you think you’re figuring stuff out, throws you a curveball.”

Aside from managing elements of nature, Hall says their vineyards offer prime feasting for bears. “They can eat, from what I’ve heard and read about,” Hall says, “up to a ton of grapes per week.” At $3,000 per ton, Hall estimates that one bear could cost them around $12,000 in just four weeks. While they try to use bird scarers to keep them away, the bears quickly recognize that there’s no real threat. 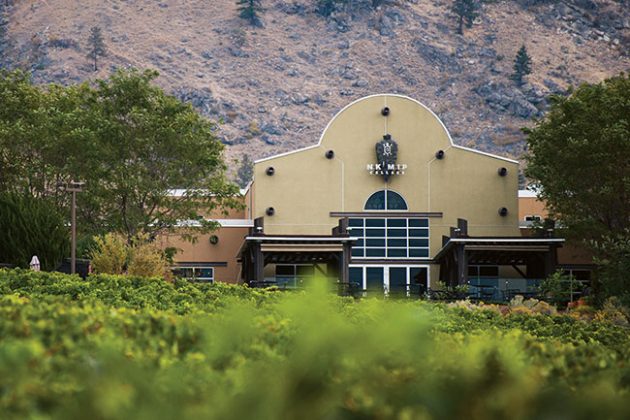 The production at Nk’Mip Cellars began at approximately 10,000 cases and has settled at 18,000 cases, their ideal for making a great product as efficiently as possible.

Adapting to challenges like these is nothing new for Hall or his community. Originally called Nk’Mip Vineyards, the OIB started their first 300- to 350-acre vineyard in the 1960s. At the time, band members were being forced to leave their families and their community to seek work outside the province. Hall says this affected his father who, as a 12-year-old, was responsible for his eight younger siblings for a time.

The chief and counsel saw the vineyard as an entrepreneurial solution. “For me, to see [the chief’s] vision or utilize that vision and actually live it like fifty years later, it’s like wow,” Hall says, “if my elder wasn’t there to do this for me then who knows where I would be.”

“For me, to see [the chief’s] vision or utilize that vision and actually live it like fifty years later, it’s like wow,” Hall says, “if my elder wasn’t there to do this for me then who knows where I would be.”

In the 1990s, the owner of Jackson-Triggs, a popular Canadian winery, asked the chief if he would consider leasing some of the land and entering a partnership. The chief agreed on the condition that they would help the OIB establish a winery supplied by their own grapes.

“We’re producing some of the best grapes in the Okanagan,” Hall says, “and we want to use those grapes to produce our wines.” Nk’Mip Cellars was born in 2002 with the OIB owning 51 per cent of it. That was two years before Hall began his career there.

While they had been making wine in the Okanagan for a long time, the wine industry really began there in the ‘90s when they started producing quality wine. “Nobody really had an idea of what we could produce,” Hall says.

The production at Nk’Mip Cellars began at approximately 10,000 cases and, eventually, up to 20,000 a year. Now they’ve settled at 18,000 cases, their ideal for making a great product as efficiently as possible. The winery has grown in other ways as supporting businesses have popped up around it, including a hotel, a cultural centre, a golf course and a restaurant. Hall estimates they can now see around 300 to 400 people come through the winery each day during peak season.

It’s not just about the numbers, however. Hall says he’s proud to be one of the first Indigenous winemakers in North America and to be part of the small community of winemakers in Canada – an industry that helps bring people together in unique ways. “You have a bottle of wine between a few people and you almost get away from the superficial conversations,” Hall says. “You start talking about life and what actually matters.”

For Nk’Mip Cellars, what actually matters is producing grapes and wine on their own land in a sustainable way and having a lineage to back it up. “If I can’t leave that land for the next generation then I would feel that I have failed,” Hall says. “We are supposed to be the protectors of the land. We’re the original protectors and I believe in my heart that, to this day, that I follow that.”