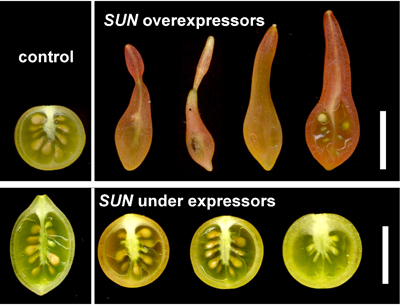 Ohio State University crop scientists have cloned a gene that controls the shape of tomatoes, a discovery that could help unravel the mystery behind the huge morphological differences among edible fruits and vegetables as well as provide new insight into mechanisms of plant development.

The gene – dubbed SUN – is only the second ever found to play a significant role in the elongated shape of various tomato varieties, says Dr. Esther van der Knaap, lead researcher in the study and assistant professor in the Department of Horticulture and Crop
Science at Ohio State’s Ohio Agricultural Research and Development Center (OARDC) in Wooster, Ohio.

The discovery was reported, as the cover article, in a recent issue of the journal, Science.