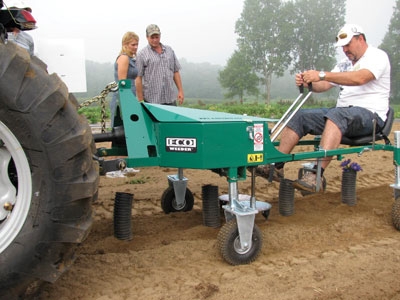 The Echo Weeder is the latest in chemical-free weed control and the PTO driven one-row can work approximately five acres per day while a hydraulic driven six-row system is also available, said Univerco manufacturer and owner Mario Bisaillon, who provided a demonstration at the Fruit & Veg Tech X-Change show. Photos by Hugh McElhone

The latest technology was showcased at Canada’s first Fruit & Veg Tech X-Change, held in early September near St. Williams, Ont. The three-day horticulture trade show attracted some 240 vendors featuring everything from controlled atmosphere systems for fruit, to a ride-along machine for picking apples, to four-wheeled robots towing wagons or sprayers through the field.

Dale Vranckx rented out a considerable chunk of his blueberry farm for the event.

“We want to really promote sustainable farming and what it can do for this area,” he said. “Shows like this are for the next generation of farmers.”

“There are really no shows specifically for the fruit and vegetable industry in North America,” said show organizer Jordan Underhill. He said it took four years of planning to put it together and they tried to keep it high tech but also informal and welcoming. “We still need to prove ourselves,” he said.

“This show is driven at the producer level,” said Underhill. He wanted agribusiness, agriculture representatives and producers to network together and come up with new ideas to improve farming. “Consumers want more information too and this show will help promote our industry to them while educating us both.”

Underhill said Norfolk County, where the show was held, is the ideal place for the event because the county is the most diverse fruit and vegetable growing region in Ontario. Perhaps as the show grows and becomes better known, he hopes more agricultural companies will move to Norfolk and set up permanent offices.

“There is great potential in Norfolk with its soils and its climate. We are on the cutting edge of technology in many fields and we’re competitive,” said Toby Barrett, MPP.

“I said go for it,” recalled Marc VandenBussche, president of VandenBussche Irrigation, when asked earlier if he thought the show was a good idea. “It’s good to see the younger generations here,” he said. Producers want to see the latest technology available and they want to see more demonstrations. “I’m looking forward to attending this next year,” he said.