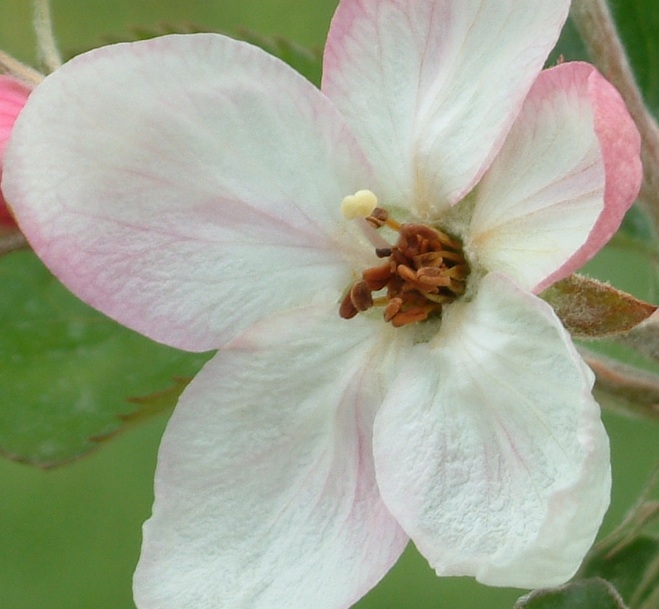 An example of frost damage on an apple blossom.

May 1, 2013, Kelowna, BC – Snow crept down Okanagan hillsides like a forgotten enemy April 30. Its ally, sub-zero temperatures, was set to follow early Wednesday morning but instead remained barely above freezing

Despite that reprieve, some Okanagan fruit growers will be making nervous inspections of their farms, hoping not to find frost damage in blossoming apple and cherry orchards.

But that was at the Kelowna airport; some regions of the Central Okanagan might have experienced temperatures several degrees cooler than that, longtime fruit grower Fred Steele said.

“There are a lot of micro climates around Kelowna,” Steele said. “If people are located in frost pockets or low-lying areas, they might not be feeling too good right now.”

“If the temperatures get down below -2 C, we could see damage to apple and cherry trees, depending on if they’re in bloom or not,” Steele said.

Frost after blossom can impact the size, quality and even the shape of the subsequent fruit, significantly reducing its value. On May 10, 2010, temperatures fell to -9 C in Steele’s orchard, causing severe damage.

About 40 centimetres of snow fell on the Okanagan Connector between April 29 and April 30 according to instruments maintained by the B.C. Ministry of Transportation, forcing the freeway’s temporary closure.

“That’s a really significant amount for any time of year in such a short period, but particularly for late April,” said Environment Canada meteorologist Doug Lundquist.

But the cold front, which originated in Alaska, will soon be pushed aside by much warmer air mass headed to B.C. from Hawaii, Lundquist said.

Temperatures will soar into the mid-20s by the weekend, with sunny skies forecast.

“It’s pretty normal in spring for there to be such a swing in temperatures”’ he said.