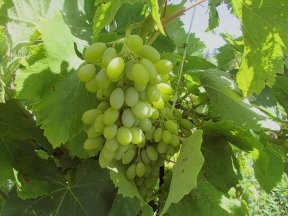 Vineland is scouting the world for new fresh grape varieties suited to the Canadian climate with consumer appeal. Contributed photo

“Vineland is scouting the world for new fresh grape varieties suited to the Canadian climate with consumer appeal.”

That’s the summary of an exciting research project currently underway at the Agriculture and Agri-food Canada Vineland Research and Innovation Centre in Vineland, Ont.

Funding and other support for this project is being provided through the AgriInnovation program (under the federal Growing Forward 2 funding framework), Ontario Tender Fruit Growers (OTFG), Ontario Fresh Grape Growers (OFGG), Vinetech Canada (a private firm based in Niagara-on-the-Lake that provides grapevines and support services) and the University of Guelph.

“The goal is to replace a certain percentage of the imports, to extend the season for local fruit and provide different flavours produced locally for consumers,” says study lead Michael Kauzlaric, technology scout and grower outreach at Vineland.

The study began in 2014, when Vineland imported six seedless grape cultivars – three green and three blue – from a U.S. breeding program for testing with a goal of commercial release starting in 2018. In addition, five other selections were tested after being in quarantine to check for viruses.

This project provides a unique opportunity for the Ontario table grape industry to diversify and reach new consumers with Ontario seedless grape varieties that replace imports, says Sarah Marshall, manager of the OTFG and OFFG.

“Coronation is the main grape we grow now,” she explains. “It has a tart, sweet flavour, a very unique profile, and kids don’t generally like it. So we’re looking for a lunch box seedless grape that we feel we could grow in Ontario. With it, we’d be able to get some of that shelf space in stores every fall.”

With the research project still in its infancy, Kauzlaric could only comment on the entire test block.

“I don’t have enough info to break it down per variety,” he explains, “with 2016 being the first year of fruit observation. [The test block] showed good signs that all varieties had a satisfactory amount of fruit in their third growing season.”

In addition, all six selections ripened after the industry standards Sovereign Coronation and Himrods, the two varieties used as references.

In terms of fruit, Kauzlaric says each variety provided grapes with several different characteristics such as crunchy, slightly tart/sweet, muscat-flavoured, and even different fruit shapes that he hopes will “provide an excellent eating experience for consumers.” The structure of grape clusters is also being observed in this study, with one main goal of breeders being to develop bunches the shape of the African continent.

Some members of industry, including retailers, have tasted the varieties and all had different comments on each. Kauzlaric says these stakeholders are interested to see how the 2017 fruit will turn out. Some of the harvest was placed in cold storage to see how it will hold up. Further taste and quality sampling will occur in the coming months.

Marshall notes that if samples had been brought from the U.S. for taste tests before these trials took place here in Canada, it would not have provided any meaningful information.

“There’s a totally different flavour depending on where grapes are grown, and we also had to see if certain varieties could even grow here,” she explains.

In terms of the five other selections that were held in quarantine to check for viruses, Kauzlaric says the virus cleaning process moved ahead faster than anticipated.

“Three of the five selections are slated for release in 2017 and through discussions with the Ontario Fresh Grape Growers, the other two selections will go ahead for future virus testing in order to ensure clean plant material is provided to the Canadian industry and to get started on the right foot. The variety owner has provided fruit samples and Vineland has shared them with industry and retailers to garner feedback. The response has been very positive as new flavours and colours are found in these five varieties.”

He adds that the varieties contain some Labrusca parentage in their genes, which helps them tolerate Canada’s cold.

Kauzlaric says everything is on track for an anticipated commercial release of the six seedless varieties in 2018, but it may be possible in 2017.

“We will find out later as Vineland meets with the OFGG this coming winter to review the 2016 results,” he says.

It’s hoped by 2020 some initial commercial plantings will occur of the five other varieties.

In 2017, the goals for this project include having the plants survive the 2016/2017 winter and providing the best scenarios possible for the grapevines to continue to grow.

“Over the winter, we will also evaluate the cold tolerance of buds in a freezer,” Kauzlaric says. “From what was learned in 2016 and through feedback from the OFGG, we’ll employ different commercial cultural practices in an attempt to grow a successful crop in 2017 and also provide fruit samples to interested growers across Canada.”