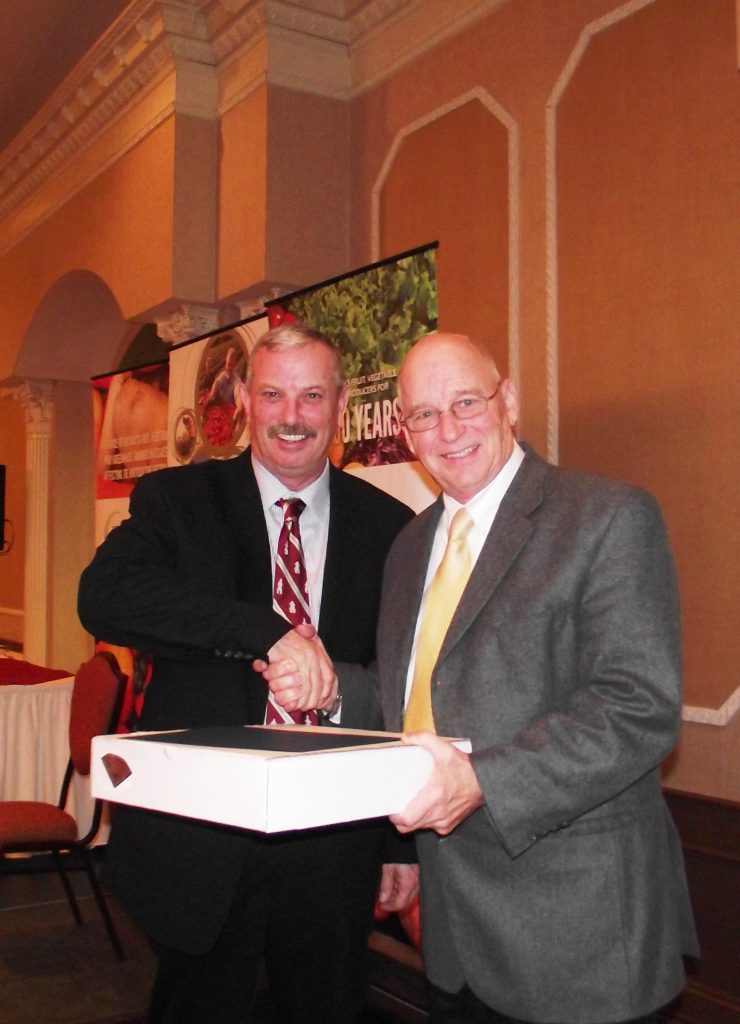 January 14, 2015, Niagara Falls Ont – The recently retired CEO of the Ontario Fruit and Vegetable Growers’ Association (OFVGA) has been recognized for his long-standing commitment and contributions to the industry.

Art Smith, who led the organization from 2003 until mid-2014, was presented with the Industry Award of Merit at the OFVGA annual banquet held recently in Niagara Falls.

“Art has been a tireless advocate on behalf of Ontario’s fruit and vegetable growers for decades, first as a grower and board member, and then as a senior staff member of several horticultural organizations,” says OFVGA chair Ray Duc. “It is an honour for me to present this award to such a deserving individual who has been responsible for supporting and enabling so many of our industry’s successes.”

Smith was born and raised on a tender fruit farm in the Niagara Region that has been in the Smith family for more than 100 years; his niece Jennifer, who runs the farm today with her father and son, is the 10th generation.

After graduating from the University of Guelph in 1973, he returned to the home farm before starting his own grape vineyard on the bench of the Niagara Escarpment.

He was a member, director and eventually chair of the Grape Growers of Ontario (GGO), as well as holding the position of executive director prior to joining the OFVGA. During his time as GGO chair, Smith played a key role in the development of the Grape and Wine Adjustment Program, which helped the grape and wine industry become competitive in the global market place following the introduction of the North American Free Trade Agreement.

As CEO of the OFVGA, Smith moved the organization to a strong financial position and, in 2005, led implementation of a policy that saw the OFVGA pay membership dues for all of its member organizations to the Canadian Horticultural Council. This has helped create a stronger voice for horticulture at the national level.

More recently, the OFVGA created a research and promotion fund that has returned more than $1 million in container tolls to the OFVGA member organizations.

Smith was also instrumental in heading lobby efforts that have led to ad-hoc payments of more than $200 million to fruit and vegetable growers from successive Ontario governments over the last decade, including the Self-Directed Risk Management (SDRM) program.