The AgRobotics Working Group looks to take the test-run burden off individual producers. 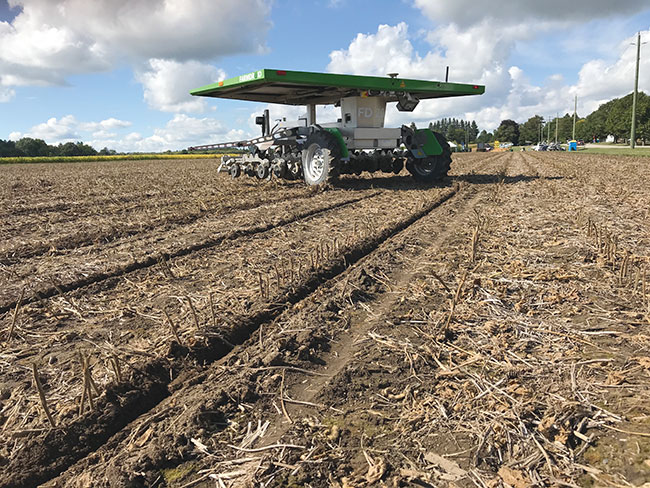 The FarmDroid, an autonomous, solar-powered ag robot, is among the technologies being tested as part of the AgRobotics Working Group. Photo by Alex Barnard.

Interested in ag robotics but not sure where to start? The AgRobotics Working Group might be what you’re looking for.

The group was established in 2021 and is chaired by Kristen Obeid, horticulture weed management specialist with the Ontario Ministry of Agriculture, Food and Rural Affairs (OMAFRA). She got involved when Chuck Baresich and Grant Elgie from Haggerty Creek contacted OMAFRA to trial the Naïo Oz autonomous weeder in annual vegetable crops.

The group began with around 15 members who were interested in being involved in trying out new technology and has ballooned to nearly 80 members as of early October, comprised of extension personnel, producers, associations, researchers, technology companies, government and other industry stakeholders, bringing their varied expertises together.

“That just shows there’s not only a need, but a real interest and a desire for automation in agriculture,” Obeid says. “What we’re trying to do is take the risk away from individual producers. We’re trying to learn about the technology and figure out all the bugs first.

“This technology, it’s not cheap. So, you want to make sure it’s going to work for the producers before you recommend it.”

To that end, the group has been testing and demonstrating a variety of agtech and robots over the past year and a half, with many successes and plenty of failures to learn from – “opportunities for improvement,” as Obeid says.

One robot Obeid hopes to work with next is the Naïo Ted, a multifunctional vineyard robot that has already seen success in France and Germany.

“We need to find new solutions to everything in agriculture just because of the rate of change and disruption in the world today,” she says. “Growers have a lot of responsibility when it comes to all of those challenges that lie ahead for them, with climate change, labour, supply chain issues – there’s a lot thrown at them. So, I think it’s just a function of trying to find those efficiencies to stay in business and stay sustainable and meet consumer demands.”

The group has grown so large, so quickly, they’re having to consider adopting a more formalized structure and finding more resources to avoid missing out on any opportunities.

“There’s a lot of technology out there – if you’ve got a problem, there’s somebody in the world working on it,” Obeid says.

“We want to make sure we really take our time and be thoughtful about the amount of work we can actually take on. But as the group grows, we get more willing participants.”