Ferme Tourne-Sol's Reid Allaway has taken to retrofitting tractors for the on-farm benefits, as well as the environmental factors. 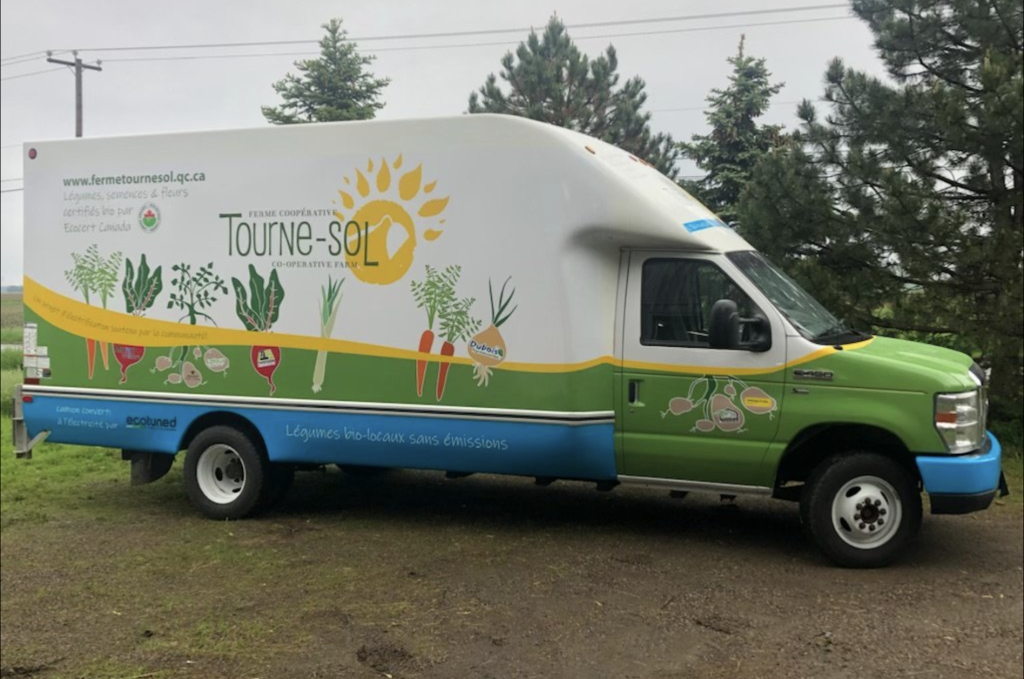 The agricultural sector produces a significant proportion of Canada’s greenhouse gas (GHG) emissions – and that portion is rising, according to the National Farmers Union.

Reducing fossil fuel use isn’t something that happens overnight, but it can be done. For Quebec farmer Reid Allaway, limiting fossil fuels has had more benefits than sustainability alone.

From burning fossil fuels to running on battery power

Allaway speaks with a no-nonsense cadence and passionately geeks out when it comes time to dig into the nitty-gritty of tractor retrofitting.

At McGill University’s Macdonald campus, nestled in a quiet part of the island of Montreal, is where Allaway became acquainted with farming life. “I started meeting farmers, and they actually seemed to be the folks who had the most interesting lives and jobs and face the most rewarding challenges,” he says. “They also seem to be happier with their career choices than anyone else I’ve met.”

After graduating, Allaway started up a worker’s co-operative with a group of friends who’d been working and living on farms together. Seventeen years later, Ferme Co-opérative Tourne-Sol is a successful, sustainable enterprise and home to a popular CSA (community-supported agriculture) program.

Allaway, who says his title of director of infrastructure and machinery is more made up than official, has been responsible for the farm’s equipment and infrastructure from the outset thanks to his aptitude for the technical side of things.

While he’s been the unofficial captain of the farm’s machinery since the start, it’s only recently – he estimates about five years ago – that he began retrofitting old tractors. He was aware of the potential of converting machines to electric. Still, it wasn’t until an engineer and fellow tinkerer explained the battery revolution was underway that he dipped his toes into retrofitting.

“There were enough Chevy Volts and Nissan LEAFs on the road that we could go and pick them up at the scrapyard,” Allaway says. With more lithium batteries in circulation, there was no longer a need to rely on problematic, lead-containing batteries, which he says are cumbersome.

The benefits of electric

Perhaps his most ambitious project to date is the retrofitting of an old engine-powered cultivating tractor. Replacing the engine with a modern lithium battery and an electric power train, he says, turned an irritating-to-use machine into a fantastic tool.

Going into the benefits of electric tractor conversion, Allaway barely mutters a word about the lessened environmental impact. Instead, he enthusiastically expounds on how the tractors are more pleasant to operate, safer to use and notably quieter than their fossil-fuel-powered counterparts.

“[An electric tractor] doesn’t require you to handle flammable liquids or poisons, it doesn’t spew any exhaust and it doesn’t vibrate nearly as much, so you can operate it more safely, more easily for longer,” he explains.

Reducing fossil fuel use is an obvious benefit of electrifying farm machinery but, for Allaway, the fact that the machines are saving the farm time and money and improving quality of life on the farm is paramount. It’s also perhaps a testament to how approaches to climate change don’t need to focus on taking things away. By finding ways to innovate, farmers like Allaway are proving that reducing fossil fuel use doesn’t have to be a painful struggle done begrudgingly for the good of the planet.

An eye toward the future

Reid Allaway leans on the new electric delivery truck, or the “elec-truck,” as the farm calls it.

For Allaway, the rising cost of fuel and threat of climate change makes finding alternatives to fossil fuels a no-brainer. While he admits he can’t see into the future, he ventures a guess that companies like John Deere are likely pumping millions of dollars into fossil fuel-free farm equipment research and development. “I think I’ll probably still be converting our machines for the next five to 10 years, and then thereafter, there may be commercially available options that we can afford.” It won’t be long before farmers ask the question, “gas or electric?” when buying new equipment, Allaway suggests.

What’s next for Ferme Tourne-Sol and its resident technical innovator? Recently, the farm launched its brand new, crowdfunded electric delivery truck. Allaway also tells me he has multiple projects up his sleeve, including improvements to the greenhouse heating system and eventually replacing or converting all the diesel tractors still on the farm. The ultimate goal is to stop using fossil fuels entirely, which Allaway thinks will happen in his lifetime.

And he firmly believes there’s no going back. “I don’t think that there’s a future for [gas or diesel] tech on our farm because we’ve tasted the alternative, and it makes us happier, and it makes our farm a nicer place to work – with the added benefit that we’re reducing our farm’s ecological impact.”