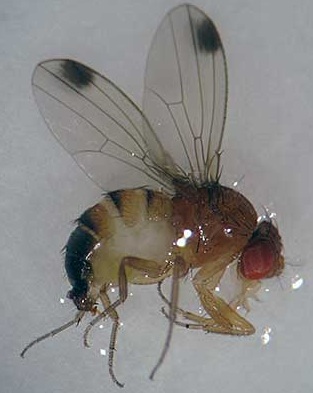 December
9, 2010, Kelowna, BC – Okanagan cherry growers are pacing nervously as they
await data on a fly that resulted in more than 450 tonnes of British Columbia
cherries being rejected by the packinghouses last summer.

December
9, 2010, Kelowna, BC – Okanagan cherry growers are pacing nervously as they
await data on a fly that resulted in more than 450 tonnes of British Columbia
cherries being rejected by the packinghouses last summer.

The
spotted wing drosophila, which originated in Japan, was first seen in this
province in 2009, but has spread throughout North America.

“It’s
certainly present,” said David Geen, vice-chair of the Okanagan Kootenay Cherry
Growers Association. “Most of the fruit went through with no problem this year.
There wasn’t major consequences this year at all, but I think all (fruit
growers) are worried.”

Geen
said lots of information is being collected and analyzed to determine which are
the host fruits, from California to B.C.

“It’s
probably hosted by all kinds of things we don’t consider fruit,” he said.
“Rosehips, chokecherries, elderberries that we don’t eat, but are growing in
the wild.”

The
flies are prolific and multiply so quickly that controlling them with chemicals
is not likely to be successful, he said. But he noted cold temperatures after
the fruit is harvested could have an effect.

The
Okanagan Tree Fruit Cooperative had a policy they call a “porch test,” said Brian
Mennell, the association’s director responsible for keeping up-to-date on
research.

That
means when the fruit comes in, a sample is taken. If larvae is discovered, the
fruit is rejected, he explained.

“There
was over a million pounds of fruit rejected, but that’s not to say it didn’t
get sold somewhere else,” he said.

The
frightening thing about this fly is it is just so widespread and it affects
everybody.”

His
partner, Linda Edwards, has talked to Washington state’s exotic pest
specialist, who predicted agricultural practices will be totally different in
that state, Oregon and the Fraser Valley. That’s
because it appears the fly goes after blueberries, strawberries, raspberries
and wild blackberries

The
Canadian Food Inspection Agency changed its policy halfway through the season
because it was almost impossible to find fruit with no larvae.

A
co-ordinated plan is now being developed based on understanding the biology and
which chemicals will best fight the pests.

Okanagan
Tree Fruit Cooperative sampled fruit throughout the Okanagan and found the bug
just about everywhere. In the Similkameen, where Mennell farms, the fly was
found in closed fruit stands. So far, Creston cherries have escaped

Norton,
who operates a family orchard in Oliver, has described the fly as “the mad cow
disease of the cherry industry.”