From a shed on the side of the road to a thriving suburban market, Two EE’s Farm Market in Surrey, B.C., has grown with the community. 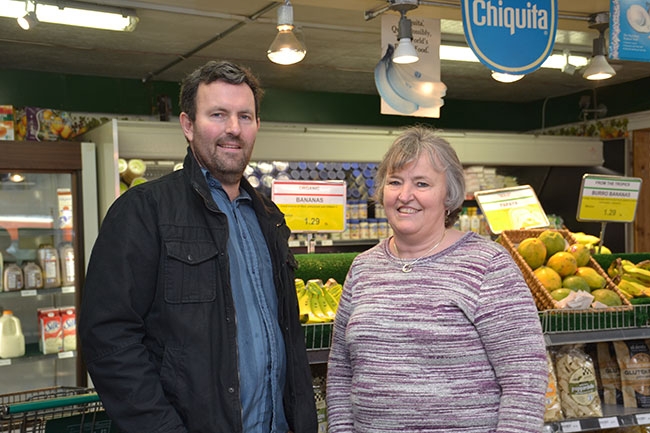 As the customer base increased, the market began carrying a wider range of products, adding some import products, dairy and even a little bit of organic meat to meet demand. Contributed photo

A bold orange border marked the roadside stand of Two EE’s Farm Market in the early days – the same bright identifier still seen on the building today. For many in the community of Surrey, B.C., Two EE’s, and the Schoen family that owns and operates the market, has remained a landmark, even as the community around it changed and underwent mass development.

Ann Jansen (nee Schoen) and her brother Mike Schoen are behind the market and organic farming business now, having taken over from their parents, Henk and Jenny.

“It was a shed on the side of the highway,” Mike says, describing what existed when his grandfather bought the property his parents moved onto when they married in 1960.

In those years, from the shed and land that had previously been owned by Emil and Elizabeth Kowalski (thus the Two EE’s name) Henk and Jenny sold eggs, honey, homemade bread and summer jams. Having lived through the Nazi control in Holland years before coming to Canada, Henk was anti-establishment when it came to rules that infringed upon his freedom.

“Dad put it on paper that he owned the Okanagan bees to be able to sell the honey,” Ann says.

At that time, for someone to sell honey, it had to come from their own bees and while Henk had a few hives on his property, the majority of the honey came from other colonies in the Interior of B.C. Of course, he didn’t own these bees, but he did sell their honey despite the white lie.

With nine children, Henk had a vegetable garden on the property and the couple would sell part of the vegetable crop to the public. Gradually, as the family grew, Henk carved more and more of the five-and-a-half acres from the trees and scrub that occupied it and nurtured it into farmland a piece at a time, until the entire site was being farmed. As the children grew, they helped out. Henk – trained as a horticulturalist in Holland – went full-time on the farm after the couple’s third child was born.

“We all had to go spend time to go pick rocks,” Ann explains. “It was a punishment. When I first started helping them, I was seven or eight I suppose.”

Henk’s anti-establishment streak rose up again when the egg quota system was introduced. A producer could report that their hens weren’t laying, which Henk did, but continued to sell his eggs elsewhere. After six months, the quota body called asking why the hens still weren’t laying since two months is the common timeframe.

His answer was bold, according to Mike.

“He told them: ‘They [the hens] found out what you’re doing [imposing quota regulations] and they stopped laying,” Mike says. “They had a great big fight. He told them the reason he left Holland in the first place was because of that [control and the quota system].”

“Vegetables was what he wanted to do anyway,” Ann adds.

In addition to growing his own vegetables, Henk was not one to allow food waste. He once purchased spoiled potatoes from a fellow farmer and had the kids pick out the good ones among the few rotten ones. Ann recalls a time when a farmer couldn’t get into his carrot field because it was too wet so Henk and the kids went and pulled the carrots by hand after purchasing the crop.

“We just don’t go dig them ourselves anymore,” Ann says.

As best they can recall, Ann and Mike’s parents grew cabbage, rhubarb, lettuces and carrots in the early years. By 1999, production from five-and-a-half acres plus produce from other local farmers was no longer enough to keep pace with demand. Henk purchased 25 acres east of the existing site.

Now, in 2018, having sold a large portion of the original site to the City of Surrey for a park, the 25-acre site is the primary production property with 12,000 square feet in greenhouses and the rest as uncovered crops. The original site is home to the much-added-to market and maybe 0.5 acres for greenhouses and a small amount of uncovered crops.

Everything Two EE’s grows is organic and has been for decades. In addition to selling their product in the market, the Schoens also sell to Whole Foods and Discovery Organics.

As the customer base increased, the market began carrying a wider range of products, adding some import products, dairy and even a little bit of organic meat to meet demand.

“Dad was one of the pioneers into it,” Ann says of being organic. “Dad realized himself that chemicals were no good. He thought they weren’t good in our bodies either.”

It was a lot of trial and error to be organic in the beginning when what Henk called “the granola crunchers” thought using a tractor prevented food from being organic. He tried a lot of things and, according to Ann, people were surprised at what he was able to do. Part of the success is attributed to the farm growing all kinds of vegetables: potatoes, carrots, beets, kohlrabi, leeks, chards, corn, lettuces, kale, onions, spinach, squashes, pumpkins, peas, pepper, bok choi, herbs and more. Melons are the only fruit.

Mike followed in his dad’s footsteps, going to horticulture school and then working on the land to apply his education. He has continued to be diverse in planting and has learned to go with market demands.

“Mono-cropping is where you have the problem with pests,” he says. “Also, you don’t lose everything if you lose a crop.”

One of the changes Mike has noticed includes the shift in when people shop.

“When mothers were at home, they’d come shop during the day,” he says. “Now what you kind of have is two kinds of rushes.”

He explains one rush comes as people pick kids up from school while the other comes at the end of their workday. No longer is there a steady flow of customers throughout the day. As the customer base increased, the market began carrying a wider range of products, adding some import products, dairy and even a little bit of organic meat to meet demand.

Another change Mike has witnessed is the need for a wider range of non-native produce.

“Diversity of stuff,” he explains. “We’re carrying stuff for Punjabi and Asian [cultures] and other people want to try that stuff.”

There’s also a demand for more things year round. As people became more detached from farming, they lost sight of what the growing process looked like.

“They expect it year round,” Ann says. “We didn’t have fresh green beans in the winter [decades ago], you had canning.”

The market also carries a few specialty items and a lot of Dutch products.

“Over all the years, those shifts,” Ann says. “There’s always a new thing.”

One that was surprising was the rise in interest in kale.

“Dad used to grow kale just for the Dutch people. We sold them for 50 cents a head,” Mike says. “Then the crazy people started writing about how great kale is and you’re picking two leaves for 50 cents.”

He notes that cilantro has grown significantly in popularity, while lettuce has slowed – at least the head variety – as bagged salads have taken off.

Henk passed away in 2016, just four months after his wife Jenny. He was involved in the operation up until he died. Three other family members work alongside Ann and Mike and Ann is quick to point out that some of the Two EE’s employees have been with the business since before Mike.

The community around Two EE’s would be unrecognizable now to their maternal grandfather, who originally purchased the site, but the market has grown and shifted to meet the demographics and population growth in the area. And, throughout it all, it has remained a family-run business.