The lush fields of crops that can
be seen on any Sunday drive throughout Prince Edward Island have long
served as a scenic backdrop for the tourism industry. 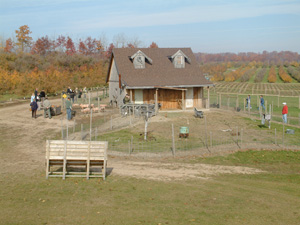 The lush fields of crops that can be seen on any Sunday drive throughout Prince Edward Island have long served as a scenic backdrop for the tourism industry. Now, efforts are being made to further build the links between agriculture and tourism. At a time when visitors are looking for an “experience” and declining margins are forcing farmers to look for ways to diversify, the move is a natural fit.

The P.E.I. ADAPT Council (which administers the Canadian Adaptation and Rural Development Fund in the province for Agriculture and Agri-Food Canada), has provided financial support to the newly formed P.E.I. Agri-Tourism Club to get off the ground. For example, Wade and Patty Caseley have turned their Southwest River Farms operation in Burlington into an experience worth stopping for. During the summer months, the farm is a beehive of activity as visitors take advantage of the opportunity to learn how food is produced. The operation includes a farmers’ market featuring Neen’s Preserves (the couple purchased that company a couple of years ago) as well as other farm fresh products and a gift shop. For the younger set, there are wagon rides and the chance to check out the goats. As well, the farm can offer educational workshops and tours for both individuals and groups.

The couple is a shining example of what is required for success in 21st century agriculture. It goes without saying that their farm must be environmentally sustainable in order to attract visitors. In that regard, they have been honoured on several occasions for their environmental initiative – the most recent being their award as runner-up for the 2004 Gilbert R. Clements award for Sustainable Agriculture. They have also been honoured by the P.E.I. Soil and Crop Association.

In a time when less and less people have any direct link to agriculture, the younger generation in particular has little opportunity to see how food is produced. While an explanation of the importance of agriculture might go over their heads, give them an opportunity to see cattle being milked or the chance to pet a horse or a lamb, and they will be plenty interested.

The industry is just in its infancy in this province, but it has already achieved considerable successes in other areas. In British Columbia, it is responsible for 4,400 jobs, while in Ontario it is a $596 million industry annually. Wade added there are now even operations in the United States that instruct potential agri-tourism sites how to grow and maintain corn mazes like the one at Robinson’s in Albany.

While conceding it is not for everyone, Wade said for their operation, agri-tourism has proven to be a major plank in the farm’s long-term future. Already, the agri-tourism venture has led to the creation of 10 seasonal jobs on their farm.

The provincial group, which currently has 17 members, is now in the process of developing a long-range strategic plan. Already, it has held a number of workshops and had on-farm evaluations from Brent Warner, whom Wade called the “guru” of the industry in British Columbia. “We get close to one million visitors annually in the province and we have a major population centre in New England only a few hours drive from here,” Wade said. “The potential for this industry is huge and really only limited by the imagination.”