A recent national Agri-Food public opinion poll by Grassroots Public Affairs finds that Canadians hold positive views on the current and future state of agriculture and food in Canada.

Grassroots’ online survey measured attitudes, direction and intensity of public opinion on a range of issues and policies affecting the domestic agri-food sector.

Some of the more interesting survey findings include:

“These findings confirm that, in these uncertain times, policy makers and industry leaders can build on the agriculture sector’s reputation as the most important contributor to the country’s economic landscape,” said Peter Seemann, Grassroots’ principal and senior consultant. “Few other industries are viewed as positively by Canadians. This is a sector with enormous potential to aid in Canada’s economic recovery.” 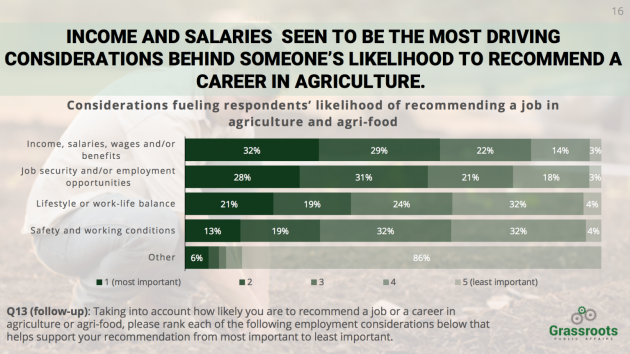 The Canada-wide survey was conducted via an online panel of 1,001 Canadians aged 18 and older. Fieldwork for the survey took place between March 23 and 30, and the survey was available in English and French.

The 2021 survey results can be viewed here.