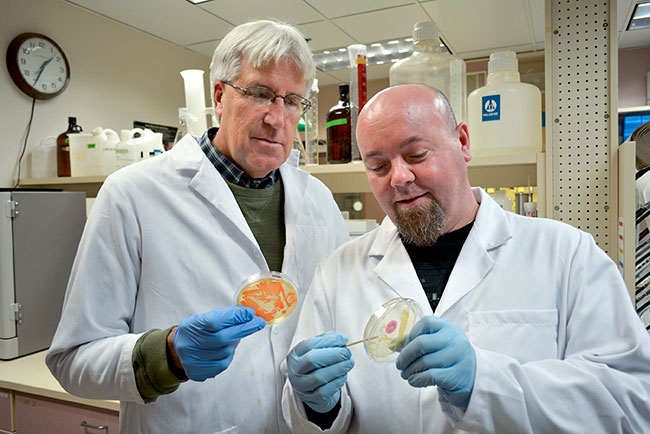 Baking ingredients may offer a way to bolster the effectiveness of Cydia pomonella granulovirus(CpGV) – a natural insect pathogen being developed to kill codling moth larvae.

The scientists’ investigations are part of broader research to incorporate novel ingredients to improve CpGV’s performance as a biobased alternative to broad-spectrum insecticides.

Currently, CpGV is used on more than 370,000 acres of apples worldwide. But its effectiveness as a bioinsecticide can be diminished by exposure to ultra-violet light and by the larvae’s tendency to burrow into fruit to feed shortly after hatching, says entomologist Alan Knight, at ARS’s Fruit and Vegetable Insect Research Unit in Wapato, Wash.

In two years of field trials, the addition of sugar and brewer’s yeast to sprays of CpGV killed more larvae (83 per cent) than virus-only formulations (55 per cent) and water-only controls (17 per cent). The treatments also reduced feeding injury to the apples in one of the two test years, Knight notes.

Knight and Peter Witzgall, a professor of chemical ecology at the Swedish University of Agricultural Sciences in Alnarp, Sweden, came up with the yeast/sugar approach based on earlier findings that wild yeasts are important to larval health and survival. They found that some of the natural yeasts present on apple surfaces also grow in larval tunnels where they provide nutrition to the insect’s diet and prevent molds from growing.

The researchers are evaluating other natural ingredients to make the virus more effective. These include feeding stimulants, such as pear ester; unpasteurized corn steep liquor; and some wild yeast species, including Metschnikowia pulcherrima and Cryptococcus tephrensis.

The virus is harmless to non-host insects, fish, wildlife, livestock, pets, and humans.