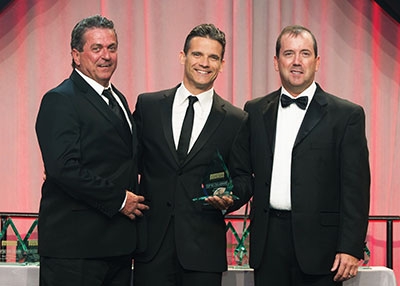 “I’m very positive about the future of the potato industry here on Prince Edward Island and across North America,” he says. “Although the processing industry has been the main driver of growth in many areas, including Prince Edward Island, I believe that going forward, retail and food service channels will continue to consolidate the fresh potato sector.”

WP Griffin Inc. was founded in 1947 by Wilfred Griffin and, 67 years later, the company is still on a growth path, cultivating potatoes and other crops on several thousand acres of land and distributing fresh pack potatoes across Canada and the United States.

The company is run by brothers John and Peter Griffin. John takes care of office administration, including strategic business development and marketing, while Peter is in charge of field operations and packing house processes.

“We have invested in new varieties, new packaging methods and equipment, as well as improved processing systems for over 20 years,” says John. “It sure wasn’t easy to move forward without challenges during the first 10 years, but our hard work and persistence has certainly paid off during the course of the last few years. We will continue to change and innovate in the future since sensible change and continued innovation has of late become the ‘new normal’ for any business that is serious about future growth and development.”

“We annually produce 3,400 acres of potatoes, grains, soybeans, hay and rye grass,” says John. “Potatoes are our passion though, and we cultivate many different potato varieties and types including Russets, reds, whites as well as yellow fleshed potatoes.”

The packaging and wash plant division of the company has the capacity and expertise to package and distribute a wide variety of traditional fresh pack potato products, as well as a line of value-added specialty products. According to John, this division has undergone a complete makeover over the past five years, integrating state-of-the-art technologies and equipment to accommodate the growing demands of consumers looking for the highest quality products in retail stores.

WP Griffin Inc. also services the Eastern United States as well as other international markets. In 2012, the company sealed a contract to supply Outback Restaurants in the Eastern U.S. Other signature private labels produced and distributed to retail chains include Griffin, Bud The Spud and Dole.

“Finding new customers is always a challenge,” says John. “But at times there are certain unforeseen rewards that come along during this process as well. When we were selected to supply all of the baker and red potatoes to The Keg restaurant chain, we were of course very excited. Since there aren’t any Keg restaurants on P.E.I., we really enjoy going to a Keg for a steak and a great P.E.I. potato when we travel to Toronto or Moncton,” he added jokingly.

Recent developments and expansions of note at WP Griffin Inc. include an upgrade to its bagging equipment, the installation of a new Volm VP12000 with duel wicket poly bagger and the acquisition of a Matrix vertical fill-form-seal bagger.

“This investment is for the long term,” says John. “I do believe that growers can and will benefit from innovative marketing initiatives in the fresh produce sector. This year we launched the Potato by Usage program at Sobeys in collaboration with Earth Fresh. This program is modelled after a similar initiative in New Zealand. The goal is to make potato selection for a desired meal occasion easier for consumers in retail stores,” he says.

Thus, if consumers are looking for a potato that is best suited for baking, all they need to do is to buy the potatoes packaged in a red bag. Blue is for mashing, yellow for roasting and green is for boiling.

WP Griffin Inc. has entered into a grower-packer contract with Albert Bartlett in the United Kingdom for cultivation of Bartlett’s Red Rooster variety in Prince Edward Island.

“We are very excited about this development,” says John. “Next we plan to launch a full line of Albert Bartlett products at Walmart stores in Eastern Canada and New England.”

What is in store for WP Griffin Inc.’s future? According to John: “the company will focus on execution in the near term. By execution I mean being fully committed to high-quality products and unmatched service on a year-round basis. In the longer term we will continue to look for new ideas to innovate our varieties, packaging and our production and cultivation activities.”

John is unequivocal about continual change and innovation at WP Griffin Inc.

“New customers, new products, and new technologies – we like to keep moving forward at a constant and goal-oriented pace,” he says.

In 2012, WP Griffin Inc. was the Atlantic winner of the Ernst & Young Entrepreneur of the Year award in the business-to-consumer products and services category. Last year, John was named one of the Top 50 CEOs in Atlantic Canada by Atlantic Business Magazine.