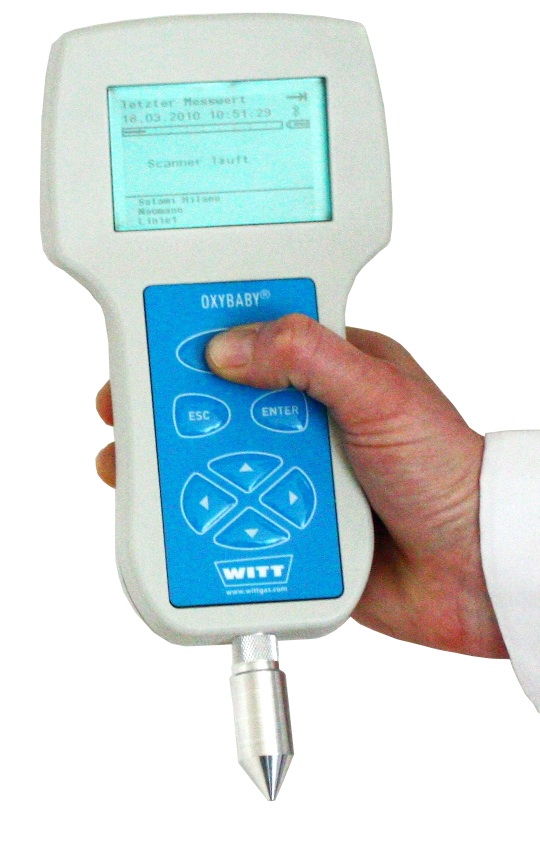 Companies
involved in the modified atmosphere packaging of foods can now perform quality
control checks that are 100 per cent mobile, allowing quality controllers to be
autonomous in their work.

The
analyzer weighs 580 grams and, measuring
187 x 106 x 91 mm, is small enough to fit in a jacket
pocket. The Oxybaby uses a needle to take random samples and measure the
concentration of the industrial gases carbon dioxide (CO2) and oxygen (O2) in
packages. The measurement results appear instantly on the illuminated graphics
display and are stored in the circulating memory, which has a capacity of 500
measurements. Using the Bluetooth connection, the readings can be printed out
on a compact label printer that can be worn on a belt. The adhesive printouts
can then be attached to the test record or the outer packaging, or can be put
in with the products right away.

Controllers
can transfer the readings to a Windows PC for further processing via Bluetooth,
either right away or at the end of their shift.

WITT
has also incorporated a bar code reader into the analyzer’s casing, resulting
in faster workflows. A controller can use it to assign his/her own name, a line
of packaging or a product to a measurement, simply by scanning the relevant bar
code.

The
analyzer is able to distinguish between up to 25 users, 50 lines of packaging
and 100 products. It takes six seconds to determine the gas concentration,
which is then displayed in increments of 0.1 per cent. Measurements are taken
in a range between 0 and 100 per cent. It can also recognize when the measuring
needle is obstructed, thus ruling out any measuring errors.

The
casing of the Oxybaby 6.0 is ergonomically shaped, hygienic and
impact-resistant. The integrated software includes menu navigation in a number
of languages. Bluetooth and the bar code reader are optional extras. In
addition to wireless technology, every Oxybaby can be attached to a printer or
a PC via its USB port, while bar code readings can be replaced by manual
selection via the menu. WITT has also incorporated an SD card slot with future
product updates in mind, allowing the user to install new firmware.

For
more information, go to www.wittgas.com.