Agriculture and Agri-Food Canada researcher is advising a two-pronged approach to eradicate wireworms from crop fields – attack both the larvae and adult populations. 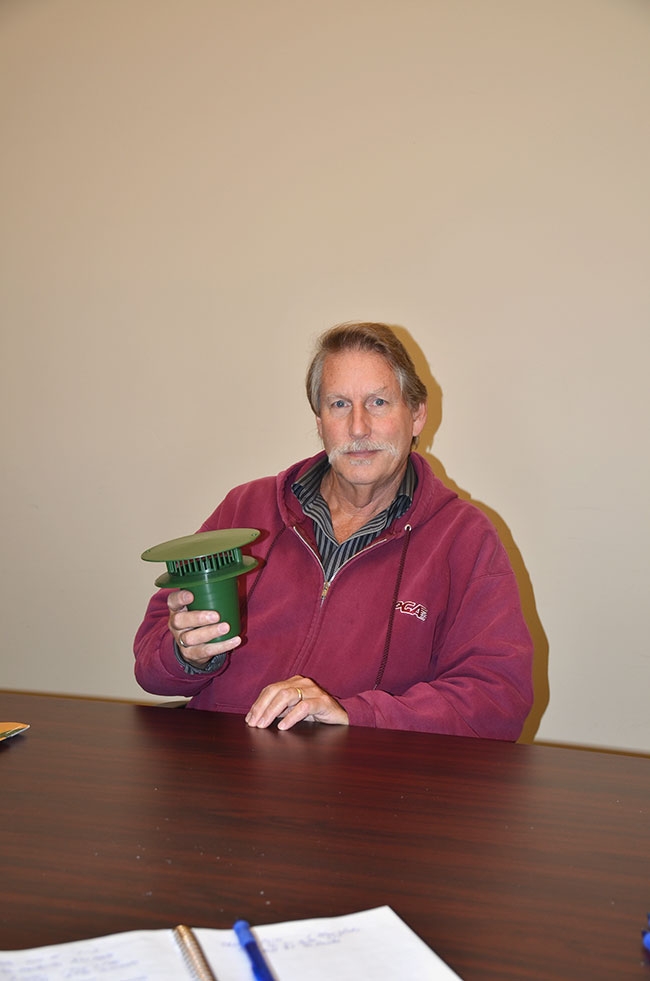 Agriculture and Agri-Food Canada researcher Bob Vernon holds a “Vernon Pitfall Trap,” a pheromone trap that can be used to detect and monitor for click beetles. PHOTO BY TOM WALKER

“The European species are reaching epidemic proportions in some areas of Canada,” he told growers at the recent Pacific Agriculture Show in Abbotsford, B.C.

Vernon is advocating a two-pronged approach. He continues to develop in-field treatments to protect potatoes from the wireworm larvae that reside in the soil. In addition, he is also directing work against click beetles, the adults of wireworms, to interrupt the egg laying cycle and thus halt the spread of the pests.

But first, Vernon says, you need to find out if you have a wireworm problem. Wireworms are hard to spot, they may be a quarter inch in length in their first year of residency in soil, and grow up to an inch by their fourth year. They also move up and down in the soil column depending on soil temperature and what food may be available.

“They can survive for long periods without food,” Vernon says. “But we are also seeing them eat a variety of plants. They like cereals and grasses the most and of course potatoes, but we are finding them in carrots in some areas of B.C., as well as in strawberries.”

“I don’t want to be the guy who tells a farmer he doesn’t have a wireworm problem and then be wrong.”

Vernon has developed a risk rating system, which is based on previous cropping history and the presence or absence of wireworms in the area. He looks at whether the field has been in pasture over the last four years (wireworms and the adult click beetles like grass). He also considers if the field has been in other crops that are favoured for egg laying such as cereals, forage, or non mustard crops (wireworms don’t like mustard). Next, he looks at the nearest wireworm damage; whether it’s in your field, or up to five kilometres away. Vernon suggests you do look for wireworms in your soil, either with shovels or corers, or bait traps. Finally, he assigns a numerical score to each of these four measures. The result is a useful guideline to determine risk to a potato crop in the upcoming season.

“Even if you can’t find wireworms in your field, it doesn’t mean they are not there,” says Vernon. “This gives growers a tool to assess their level of risk and whether they should anticipate little if any damage, a level of damage that can be treated by controls, or such a level of risk that they avoid potatoes altogether.”

“Traditionally, we have used granular insecticides for control of wireworms in soils,” says Vernon. “Thimet is no longer allowed in B.C., but can still be used in the rest of Canada.

“In B.C. we have been using a combination of Titan and Pyrinex and it has basically solved the problem for those growers,” Vernon says. “You can combine Pyrinex, which gives you excellent wireworm control, with Titan that gives you not bad wireworm control, and you get exceptional control of your below and above ground pests.

“But neonicotinoids (Titan) are under the gun right now, as you probably know,” Vernon adds. “The U.S. is talking about deregistering chlorpyrifos (Pyrinex) and, if they do, it will likely be deregistered in Canada as well. If that happens, all we have left is the pyrethroid Capture.”

Capture is applied as an in-furrow spray and it is equivalent to Pyrinex and Thimet in terms of wireworm control.

“We have a conditional registration for Capture now in Canada but full registration is being sought,” says Vernon. “So, we might have something fully registered this or next year.”

But those approaches aren’t killing the wireworms. Vernon’s lab has found that the new generation of insecticides render the wireworms unconscious (neonicotinoids) or repel them (pyrethroids). Crops might be protected, but the wireworm populations remain untouched.

As part of the wireworm cluster project, Agassiz researchers tested some 20 products last year and Vernon is hopeful.

“Our lab is considered one of the best in the world doing this work and companies are at the door asking us to test new chemistries all the time.”

Researchers are increasingly looking at methods to control the adult click beetles before they lay their eggs. Vernon points out that this doesn’t get rid of the wireworms resident in the soil, so it may take up to four years to clear a saturated field.

“You can control them both in the field you are trying to protect, and in the non-farm grassy habitats which are the reservoirs for the beetles,” Vernon explains. “Nothing is registered world wide for click beetle control specifically right now. We find that Matador works well. Registration for Matador for click beetles is going to happen next year [2018].”

Vernon is also developing trapping strategies. He has invented the “Vernon Pitfall Trap,” a pheromone trap that can be used to detect and monitor the beetles.

“The trap will tell you if you have a problem with click beetles and when to time spraying,” says Vernon. “They peak about three weeks after key emergence, which is about five days before they start laying eggs. We are working on thresholds.”

They are also looking at mass trapping of males. A single pitfall trap caught 22,000 male beetles in 2016 in P.E.I.

“We are looking to see if we can gobble up all the males before they can mate,” says Vernon. “Then the eggs that are laid will be sterile and over four years populations in the headland areas should collapse.”

Agriculture and Agri-Food Canada researcher Bob Vernon holds a “Vernon Pitfall Trap,” a pheromone trap that can be used to detect and monitor for click beetles.

He is developing two attract and kill methods using the fungus Metarhizium anisopliae LRC112, which is highly lethal to both click beetles and wireworms but does not harm beneficial insects.

“This is a fungus I discovered in Agassiz about 20 years ago and we manufacture it in our lab,” says Kabaluk. “We combine it with pheromone granules [another Kabaluk invention] and put them out in strips in fields. The pheromone blooms attract a large portion of the beetles and they are killed. We expect the granules to be useful for click beetle mating disruption.”

Wireworm larvae are also attracted to carbon dioxide and that trait is helping researchers perfect bio controls for the in-ground pests. Attracap is a German product that begins producing carbon dioxide within hours of being placed in a field. It is impregnated with Metarhizium, which kills the larvae.

“It’s expensive right now, about $400-$500 per hectare, but the price is decreasing,” says Kabaluk. “It is being used on some 10,000 hectares of potatoes in Europe and has had a number of positive reports.”

Kabaluk’s own version of Attracap – rolled oats [a high carbon dioxide emitter] and Metarhizium – reduced wireworm damage to potatoes by about 40 per cent. He credits the Europeans with discovering that placement under the tuber as being key.

“The combined CO2 of Attracap or rolled oats and the sprouting seed tuber gives a powerful attractant and brings the wireworms in contact with Metarhizium,” he said. “We are planning to pursue a Category A registration for Metarhizium LRC112 and the pheromone granules.”

“We are working on a Category A registration for Metarhizium and the pheromone granules,” says Kabaluk.