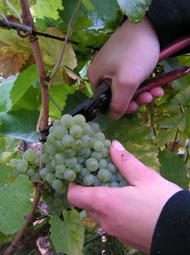 July 7, 2011, Toronto, Ont – Canada’s wine industry has far outpaced overall growth
in the beverage sector over the past decade, but is still losing market share
at home and abroad, says a new report from BMO Capital Markets Economics.

July 7, 2011, Toronto, Ont – Canada’s wine industry has far outpaced overall growth
in the beverage sector over the past decade, but is still losing market share
at home and abroad, says a new report from BMO Capital Markets Economics.

Canadian
wine production has grown by 7.6 per cent a year since 1998, compared with just
one per cent for the overall beverage sector.

But
BMO said the market share for Canadian wineries slipped to about one-third of
the domestic market in 2010 in the face of intense pressure from imports.

The
appreciation of the loonie and constraints on red wine production in Canada
have helped spur imports from so-called “New World” producers such as Australia
and Argentina as well as traditional wine powers.

The
main imports are from France, Italy, the United States and Australia. But new
competitors have caused France’s leading share of the Canadian import market to
slip.

Industry
activity should strengthen with improving market conditions over the next few
years, the report said.

While
production has picked up since early last year, demand will likely be
constrained by cautious consumers and the loonie’s strength.

BMO
senior economist Kenrick Jordan said raising consumer awareness of the quality
of the Canadian products will be critical to fighting the headwinds to growing
market share.

“While
exports will continue to play a limited role, fast-growth markets, where
incomes are rising quickly and consumption is low, should be targeted.”

BMO
said the “export intensity” of Canadian producers – the percentage of product
exported – declined to four per cent in 2010 from 15 per cent in 2001.

The
U.S. is the largest foreign market for Canadian wines. It took more than 40 per
cent of all exports in 2010, followed by China with about 20 per cent.

Sales
to the United States have increased at a brisk rate, which contrasts with a
downward trend in total wine exports by Canada.

The
industry should focus on reducing production constraints by growing grape
varieties more suitable to Canadian climate and on technologies that reduce the
adverse effects of climate, said the report.

Windmills
could be used, for example, to prevent cold air from settling over vineyards
and Icewine from grapes frozen naturally on the vine should continue to be
developed as a niche product.

Acceleration
of Canada’s wine industry following sluggish growth over much of the 1990s has
reflected a shift to wine-quality grapes from native species.

Other
factors include the creation of the Vintners Quality Alliance (VQA) standard,
expanded efforts to promote Canadian wine and industry consolidation.

Largely
focused in Ontario, B.C. and Quebec, Canada’s wine industry is small,
accounting for only 0.3 per cent of the manufacturing sector and 0.03 per cent
of the overall economy.

It
also remains the smallest beverage segment with $897 million of sales last
year.

The
industry is fragmented, with most operations being small. Only a few wineries
have 200 or more workers, which would make them medium or large by
international standards.