Features Environment Research
What is living below the surface of a cool climate vineyard? 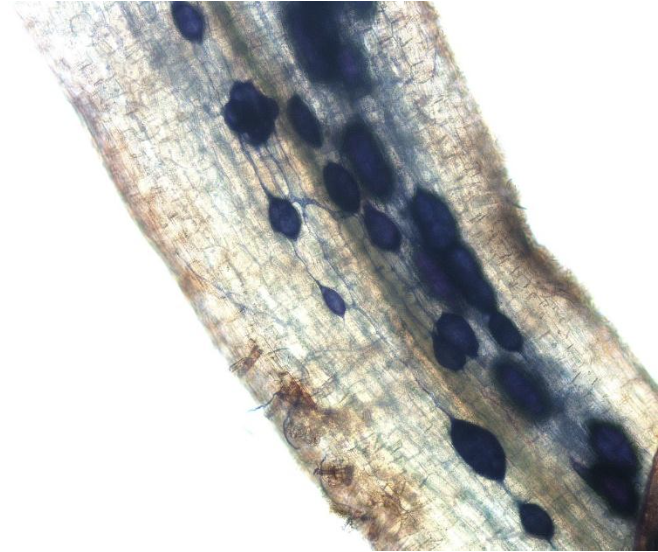 If you stroll through a vineyard, the human gaze may settle on the rows of vines, the often bare soil surface beneath those vines or a cover crop, typically made up of grass, clover and other plants. What is not discernible to the naked eye – and what has largely been ignored until recent times – is the rich environment, teeming with a wide range of life forms that live below the surface and within these plants. The advancement of molecular tools in recent years has made this world, still very much a new frontier, more accessible – and affordable – to explore.

The objective of this work was to categorize the life living in the soil, as well as the endosphere (the portion of the plant living below the surface) in an organic, cool climate vineyard in Nova Scotia, while also exploring factors that might influence what was found, such as soil depth and rootstock type. The project was led by two research scientists with Agriculture and Agri-Food Canada (AAFC) – Harrison Wright, a plant physiologist and Shawkat Ali, a plant pathologist, both working out of the Kentville Research and Development Centre in Nova Scotia – and included collaborators from Dalhousie University (Halifax and Truro, N.S.), Saint Mary’s University (Halifax) and Acadia University (Wolfville, N.S.).

Various micro-organisms, mainly bacteria and fungi, live in the soil and readily colonize plants and constitute its microbiome. A plant’s microbiome influences its growth, development, health and defence systems against biotic and abiotic environmental factors. While some specific microbes are largely considered “good” and some “bad,” the role of many is unclear and the legitimacy of such labels is dependent on the context. Improving our understanding of the microbiome, which is still in its infancy, will lead to more sustainable agricultural practices and technologies.

In this study, hundreds of distinct micro-organisms were identified living inside of the grape roots. However, the micro-organism populations were dominated by bacterial genera Pseudomonas, Niastella, and Rhizobium; most prominent fungal genera were Plectosphaerella, Trichosporon, and Ilyonectria. The function of these microbes depends on the species, but can range from promoting plant growth to known pathogens. The grape root microbiome was more specialized than that found in the soil or the predominant cover crop’s roots. Both the grape root type and the soil depth were significant factors that influenced the grape root microbial community structure.

When compared to similar studies performed in other parts of the world, the organisms found living in the roots of this vineyard were comparable to some, but remarkably different from others. In the same way that a forest ecosystem may vary completely in the species that make it up as a result of location and climate while still performing the same key functions, the same is likely true for a plant’s microbiome. The characterization of this cool climate vineyard’s microbiome provides a valuable reference point for related and future studies.

A full report on this study is available through the Phytobiomes Journal .