Features Insects Research Spraying
What a difference a drone makes 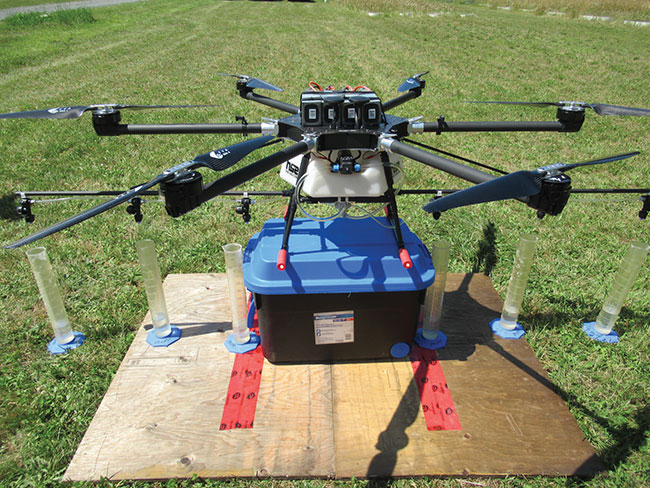 The rotors of a drone drive the spray down into the canopy, preventing the foliage from acting as an umbrella and improving penetration and coverage. Photos courtesy of Markus Clodius.

Pest control using drones could take off if the results of trials being conducted on test plots in the Fraser Valley east of Vancouver continue to go well.

An initial trial of unmanned aerial vehicles to deliver Delegate WG and Malathion 85E to beds of leeks at the Agriculture and Agri-Food Canada (AAFC) Agassiz Research and Development Centre proved to be just as effective as a boom sprayer.

“What changes if you use a drone? That’s the question we’re trying to answer, essentially,” explains Markus Clodius, principal investigator with the Centre’s integrated pest management program. “We wanted to know what effect are we getting from this on the thrips population itself with the boom and with the drone: how did the two compare?”

The results from trials last year indicate that the drone did a slightly better job than a boom sprayer in controlling thrips, and did so using just 20 per cent of the volume as the boom sprayer. There was no phytotoxicity and overall crop damage during application was less.

“This was an encouraging initial result,” says Clodius, who plans to expand the trial this year to include larger plots and slower flight speeds to improve the consistency of application.

Clodius is conducting the long-term research project in partnership with Mark Vendrig of Precision Crop Tech Inc. in Abbotsford, B.C., which supplies drones and provides consulting services to the agriculture sector. The company worked with about 40 farmers in B.C. last year, applying foliar sprays to about 45,000 acres of crops including berries, cherries, field vegetables and greenhouse crops. Vendrig has worked with growers in the U.S. and sees the potential for drones to make pesticide applications safer and more effective.

The company worked with about 40 farmers in B.C. last year, applying foliar sprays to about 45,000 acres of crops including berries, cherries, field vegetables and greenhouse crops.

The results from AAFC’s field trials helped further the research that he believes will open the door to the widespread use of the technology in Canada. Currently, the Pest Management Regulatory Agency (PMRA) considers drone applications an off-label use while the province limits licences for the aerial application of pesticides to pilots of fixed-wing aircraft and helicopters. “We’ve learned a lot as a result of this but we’ve also taken the drones to a completely different level of performance as a result,” Vendrig says. “[But] it’s not the perfect silver bullet that’s going to solve everyone’s problems.”

To date, drones have typically been used for low-altitude remote sensing to assess canopy development, foliar nutrients, irrigation stress, weed pressure, and soil quality. AAFC research stations in Summerland, B.C., Brandon, Man. and Fredericton all have research programs that involve this kind of application. “There’s a lot of things that you can gather from an overflight with the right kind of camera, right kind of software,” Clodius says.

Drones have yet to be used widely for spraying agricultural chemicals, however. “There are things you can spray with it; Mark has been applying foliar nutrients to various crops with a drone, and in theory, you can whitewash the roof of a large greenhouse with one of these things,” Clodius starts. “However, pesticides are more tightly regulated.”

Australia uses drones for herbicides and in China and Japan, they’re used to apply pesticides to rice. In India, the country uses drones to kill mosquitoes and limit the spread of vector-borne diseases. The drones are helpful because the technology is able to access hard-to-reach locations. Vendrig has conducted fungicide trials in the U.S., where some jurisdictions allow pesticide application by drone. Despite the use in other countries, the practice has been off-label in Canada, and therefore off limits. 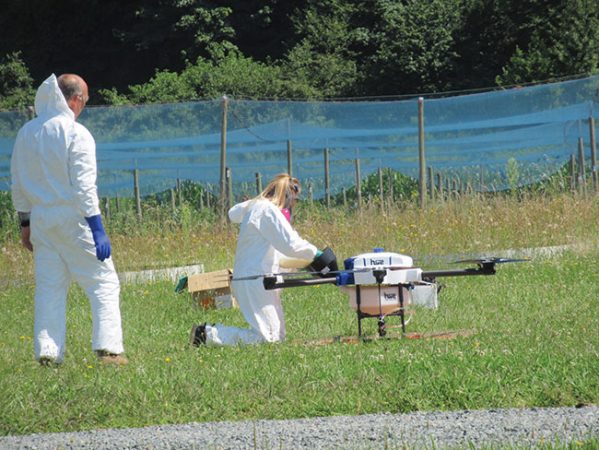 Once programmed, a drone won’t need to be reprogrammed every year, assuming that the field’s characteristics haven’t changed much. 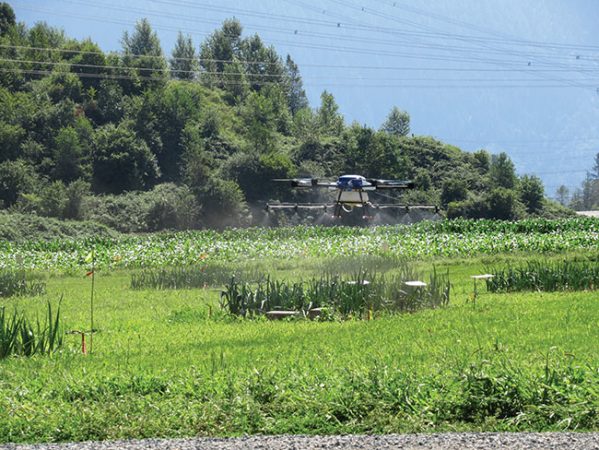 Drones promise safer delivery because application occurs at a distance from the applicator and lower volumes are typically used.

The genesis of the study of spray applications occurred when a Fraser Valley leek grower expressed interest following a demonstration at a field day in 2018. A year’s worth of preparation, including obtaining the necessary permits, led to the trial in the Agassiz Research and Development Centre last summer.

A flight path was mapped out and input into the real-time kinematic (RTK) GIS system that keeps the drone on track. It was within 30 centimetres (cm) of its programmed flight path at all times, and ultimately tracked within 5 cm of the route. Vendrig says if a drone had logged 24 hours in the field, the flight path accuracy would have been within one centimetre.

The 15-kilogram (kg) drones fly five to six metres a second and can easily cover 30 acres in an hour. Battery packs were placed at regular intervals around the field and replaced every 20 minutes to ensure a consistent power supply. This helped maintain a precise and predictable flow rate. Sprays were applied from a height of 1.5 metres. Leeks were inoculated with onion thrips and populations were monitored throughout the trial using sticky cards as well as hand-counts from individual plants. Spray cards were also assessed, with eight arrays, including seven stations each designed to assess coverage drift.

“This is an example of the kind of thing that we’re trying to digitize and analyze and look at in terms of both percentage cover of the card and the distribution of the droplets and droplet sizes,” Clodius says. The positive results from the initial trial confirms what Clodius and Vendrig had read from other areas also experimenting with drones. “You get a bigger bang for the given volume of spray,” Clodius says.

“You get a bigger bang for the given volume of spray,” Clodius says.

The particular method of application creates a more focused spraying pattern that results in less evaporation and drift at optimal wind speeds. Vortices with boom sprayers can lift up droplets, resulting in evaporation and loss. But the rotors of a drone drive the spray down into the canopy, preventing the foliage from acting as an umbrella and improving penetration and coverage. “Overall, we’re getting better results than you’ve seen with anything else,” Vendrig says. “You’re getting really good, even applications … [and] you’re only applying what’s needed to a plant in a particular area.”

While the drones themselves cost $15,000, and training and maintenance are expensive (since they’re aircraft, Transport Canada requires a certified aircraft engineer maintain them), operating them is a fraction of what it is for larger aircraft. “[It’s] favourable in comparison to boom operators, definitely favourable by comparison to helicopters and aeroplanes,” Vendrig says. “Our flight time is cheaper than what theirs is.”

Once programmed, a drone won’t need to be reprogrammed every year, assuming that the field’s characteristics haven’t changed much. “We are getting a better idea of what it can do, what it can’t do, and we’ve got good science behind it now,” Vendrig says. “We can actually help farmers use this chemistry [to] get better yields and make more money.” However, the ultimate decision whether or not to use drone will vary by circumstance. “Just because it can be done doesn’t mean it will be useful to you. Every grower’s circumstances are different,” Clodius says. “Your individual context matters . . . You’re still going to be making your own decisions about whether or not this is useful to you.”

However, the ultimate decision whether or not to use drone will vary by circumstance. “Just because it can be done doesn’t mean it will be useful to you. Every grower’s circumstances are different,” Clodius says.